“What am I afraid of ?” I asked myself not long ago. Not many things. A traveller can’t afford to carry fears with him, leaping into the unknown on every trip. The only things I could think of were snakes, which sometimes fill my dreams–and heights, which induce in me a mad impulse to take a running jump. And the previous year I’d been involved in a near-fatal car crash in Bolivia, my taxi almost plunging off a ravine, at 12000 feet, as it rolled and rolled after being driven into a mountain at high speed, all its passengers (but me) ending up in the hospital. I’d been wary of narrow and unpaved roads ever since.

Five days later, I was being driven–at very high speed–on the wrong side of a two-lane road, bicycles and blaring trucks and overfull buses and children coming at us, towards a sheer rock face in the center of Sri Lanka. Sigiriya is reached by 1300 steps, straight up, it seems, and my guidebook had told me that the ascent of the great rise was “not for the faint-hearted,” perhaps better appreciated from the ground. Half way up the rockface, climbing a vertiginous spiral staircase–bought, I later learned, from the London Underground in the 1930s–I looked down and saw nothing but air. A three- or four-hundred foot drop at my feet, if I slipped, and jungle all around.

“Are there accidents here ?” I asked my guide, fumbling along the guide-rail, and wondering why my job demanded such trips of me.

We climbed up and up, passing some half-sensible travellers who had decided to climb part way, but not ascend further, through a staircase set between a sculpted lion’s paws. Signs everywhere warned against what my guide told me were swarms of “killer bees.” At the top of our ascent, he said, it was mostly snakes.

“Only pythons, sir. No problem.”

Chameleons turned red and white and green in the sun at the top of the rock face. Huge lizards who might have been iguanas–“land monitors,” someone said–breathed evilly among the outcroppings. A man with a small wicker basket looked at me and said, “You want see cobra ?”

It could have been a compendium of my nightmares. “Leopards, wild elephants,” my driver had said, listing the occupants of the jungle we were driving through. “Also guerrillas, Tamil guerrillas, very close. You see the trucks ? They always drive together, too close, because of the wild elephants.” 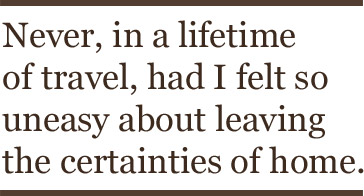 Ten months before, when I’d volunteered to take the trip (to an editor who had offered me the chance to go anywhere from Iran to Mongolia), a cease-fire had been in place in Sri Lanka and it had lasted three years. A tsunami had swept through the ill-starred island less than two years before, but that, in my crazy logic, meant that the odds were against any other calamity visiting. Westerners were buying up property in the walled fort in Galle and deluxe six-star hotels were opening up everywhere.

Almost the minute I chose Sri Lanka as my dream destination, and began making plans to go there, a new hard-line government came into power, after elections, and fighting resumed with new intensity. My editor wrote to me excitedly that war made our story more exciting and topical than ever; I, not knowing where to turn, and with a sinking and unfamiliar feeling in my stomach, went to a chapel high in the hills two days before I left California and prayed for something and then, the next day, went again, as if for insurance.

Never, in a lifetime of travel, had I felt so uneasy about leaving the certainties of home behind; something, I was sure, was telling me not to go.