Posted on July 1, 2011 Appear in Reimagining Japan, a series of essays about Japan and its future Facebook Twitter

One Japanese individual commits suicide every fifteen minutes. More than a million Japanese people are hikikomori, meaning that they almost never leave the house. Even as the country is suffering through one recession after another—shuttered stores seem to be as common as departing prime ministers—the social fabric of my adopted home, sustained and refined over centuries, is beginning to crack. Some older couples are hiring young actresses to visit them on Sundays, to say, “Hi, Mom! Hi, Pop!” because their own daughters no longer do.

Yet even as all the external registers suggest a society in collapse, and even as the horrifying earthquake and tsunami of March 2011 literally reduced parts of the country to rubble, the Japan I see around me seems much stronger and more durable than statistics suggest. It remains—becomes ever more, I sometimes feel—the pop cultural model that countries from Taiwan to Singapore are keen to follow, in its street fashions, its gizmos, its convenience-stores. It is still a byword for quality and efficiency. Its people, in moments of stress (as after the tsunami), summon a fortitude, a resolve and a community spirit that putsmost of us to shame.. And when Richard Florida at the Rotman School of Management in Toronto conducted a survey of 45 countries a few years ago, Japan ranked first in the “values index”—a register of how much it holds to the traditional. For Florida, this was not an advantage, but for those who worry that Japan has left its past behind without ever quite arriving at an international future, the result could be both a surprise and a consolation.

I look around me in the Western-style suburb near Nara where I’ve lived for eighteen years, and the external changes are startling. When first I arrived in Japan in 1987, my neighbors in California were being told that their towns were about to become suburbs of Shinjuku. Columbia Pictures was suddenly Japanese, Rockefeller Center was mostly Japanese—and magazines were reporting that the Imperial Palace in Tokyo alone was worth as much as the state of California.

In the decades since, the country’s economy has failed to consolidate that rise—or to take over the planet. And socially, on the surface, the place is ever more mongrel and untraditional. The teenage girls who looked so demure when I arrived, so different from their counterparts abroad in their ritualized innocence and lack of make-up, now look like tigerish creatures who could be modeling for Armani. Their boyfriends wear oversized Lakers T-shirts and baggy shorts, as if they’re auditioning for an L.A. street gang. Every few months, some new outrage — schoolgirl prostitution or a horrific act of violence– makes my Japanese wife and neighbors talk about the Land of Wa (or Harmony) as if it were a distant suburb of Detroit. Last year, on a train platform in Nara, a schoolboy, in the midst of morning commuter crowds, buried a kitchen knife, with a 17-centimeter blade, fatally, into a classmate. Why? “His attitude at school always made me sick.” 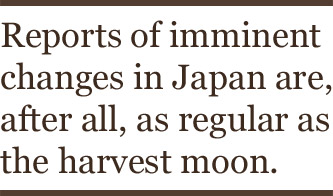 When I look around me, though — at the way people here speak, don’t speak, bow to their cell phones or instantly open their doors and share scarce water and food after a natural disaster–I wonder how far they have really moved from the traditional Japanese model. Reports of imminent changes in Japan are, after all, as regular as the harvest moon. People are always expecting this ancient archipelago to lose its distinctive character tomorrow. Every autumn, so it seems, the old in Japan express the fear that their country is going to lose its soul — and the young express their fear that it’s not.

Nara itself can serve as a diagram of the increasing tensions—the competing tenses—in Japan. At the heart of this city of 400,000 stands a deer park, in which 1,200 four-legged creatures wander freely among rolling hills, pagoda spires, a giant Buddha in what is said to be the largest wooden building in the world and pavilions sitting picturesquely on ponds. Nara became the first permanent Buddhist capital of Japan in 710, but it lost the court in 784. As a result, it has spent more than 1,200 years as a kind of forgotten place of ghosts, whose road-signs point to “Primaeval Forests” and whose maps direct you to “burial grounds.”

The most sacred Shinto shrine in the land (outside of Ise) is here, as is a treasure-hall remembering the city’s status as the eastern terminus of the Silk Road. White-gravel pathways lead through groves of trees, and past 2,000 stone lanterns. Turn one way, and you come to an old wooden building in a grove of wild plum trees that used to house Buddhist sutras; turn another, and you end up at the Nara Hotel, 100 years old in 2009, and adorned with photographs of the emperors who have offered sepulchral waves here.

Immediately outside the park, however, is all the clatter and cacophony of any post-war Japanese metropolis. Beeping machines, automated voices, flashing lights and pachinko clangor ricochet around a labyrinth of covered shopping arcades. Falafel joints, Vietnamese restaurants, McDonald’s outlets, and Indian cafes make you feel as if you’re walking through a World’s Fair, as giddy as it is globally generic. And as you move out into the suburbs, you come to areas such as mine, with Western-style homes laid out on straight, carless streets, and huge buildings called Life and Aeon (the local versions of Costco and Wal-Mart) standing guard above the commuter stations. The neighborhood where I sleep is called Shikanodai—or Deer’s Slope—and it includes no temples, no shrines, not even any jagged streets or alleyways. Late-model Mercedes doze outside hair-salons on School Dori, and almost nothing is older than my 30-year-old son.

Farther out, when I walk just beyond the boundaries of my ten-square block neighborhood, are valleys and large rural spaces filled with fantastical structures that look AS IF they have been airlifted from some science fiction writer’s imagination. One building has a nine-story front window that reflects a giant image of Albert Einstein sticking out his tongue. Across from it is a research lab built in the shape of a seven-story retina. There are great telecommunications centers set along these broad, and largely silent boulevards; buildings with rainbowed surfaces bring home the face of the 23rd century. Established during the excitement of the bubble years to serve as a “Science Town” of the future, the structures look now like beached whales, monuments to outsized dreams, their parking lots empty and cobwebs clogging their state-of-the-art doors.

I’ve never been in a position to offer the expert, Tokyo-driven diagnoses of the many professional Japan-watchers who fill this volume. My interest has always been in the private Japan. As I look around the city I’ve made my home—at the deer grazing just outside the glass-and-concrete City Hall—it’s hard not to wonder if the country’s strength lies not in its future but in its past, or at least in its traditional sense that time moves round rather than always pressing forward. Fashions change in Japan, famously, more furiously than anywhere else, and there are few places more full of surging crowds, flashing images, all the apparatus of tomorrow. But the ideas underlying all these spinning surfaces often suggest that progress is cyclical, not linear; that moments keep returning as the seasons do; and that change itself can be a constant, much as autumn’s rites of passage are. Every year, the details shift — but the pattern looks very much the same.