Where is our new-millennium Norman Mailer? It’s startling, fifty years on, to look back at the work of Mailer and others in the 1960s—from The Presidential Papers to The Armies of the Night—and see such unabashed ambition, such reckless audacity and such a stubborn American readiness to try to save the republic from itself and bring it back to its original promise. Mailer’s very titles—Advertisements for Myself, An American Dream—told us he was on a mission, committed to the transformation of country and self, and even as he gave himself over to unremittingly private (and epic) meditations on God, the Devil, cancer and plastics, he was also clearly determined to remake the public order. He ran for mayor of New York City, he made movies, he helped start an alternative weekly known as The Village Voice. Part of the exhilaration of Mailer was that he cared so ravenously, and was shooting for the moon even when he shot himself in the foot. 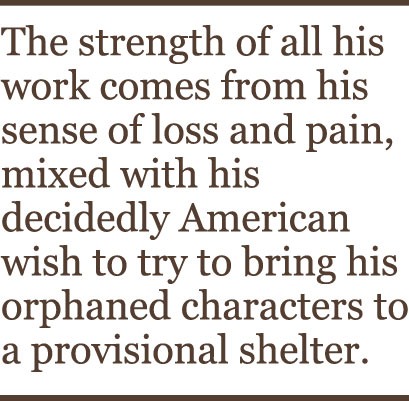 Dave Eggers comes from a much more sober, humbled, craft-loving time, and his latest novel is the opposite of a failure: it’s a clear, supremely readable parable of America in the global economy that is haunting, beautifully shaped and sad. But for all the difference between their generations, you can feel in Eggers some of the hunger, the range and the unembarrassedly serious engagement with his country that gave Mailer such a kick. Eggers asserted his bravado–along with some tonic self-mockery–in the very title of his first book, A Heartbreaking Work of Staggering Genius (a title of which Mailer would surely have approved); he followed it up with a very different kind of book, a novel, You Shall Know Our Velocity, about the impenitent determination of two young Americans to travel the world giving money away. Yet even as he has brought out seven substantial books in thirteen years, Eggers has also established his own publishing house, bristling with attitude and backward-looking invention. He’s started two magazines whose names (Timothy McSweeney’s Quarterly Concern and The Believer) openly declare their interest in home-made whimsy and optimism (or, you could say, of the past and of the future). He’s established non-profit writing and tutorial centers across the country and, in his spare minutes, written two feature movies, Where the Wild Things Are and Away We Go.

Like Mailer, he’s almost underrated precisely because he’s so ubiquitous and dares us to mock him with his unapologetic ambitions. Yet where a Mailer was consciously working in a deeply American grain, with his talk of revolution and transcendence, Eggers speaks for a new America that has to think globally and is worried about where it fits on the planetary screen. And where Mailer was bent on showing us how America could remake the world, Eggers, with ferocious energy and versatility, has been studying how the world is remaking America. Most of our great contemporary examinations of cultural sampling and bipolar belonging come from writers themselves of immigrant families; it’s invigorating, in that context, to see how Dave Eggers, born in Boston, to classic 5th generation Irish stock, and raised in Lake Forest, Illinois, has devoted himself to chronicling the shifting melting-pot, seeming to tell others’ stories more than his own.

In his fourth major book, What is the What, he gave us a non-fiction novel about Valentino Achak Deng, a Sudanese “Lost Boy” who survives wars at home and refugee camps abroad only to find that his problems are by no means behind him when finally he gets to Atlanta, and the Land of the Free; some critics may have bristled at the notion of a young white American writing the story of a real-life African villager, but it took a writer of Eggers’s artistry (and vulnerability) to give Deng’s story its heartbreaking power. In his next (non-fictional) work, Zeitoun, Eggers turned the story of Hurricane Katrina into a brilliantly structured and propulsive story whose all-American protagonist just happened to be a Moslem house-painter brought up in the Syrian coastal town of Jableh, married to a former Southern Baptist from Baton Rouge and eager to construct a new life through hard work and tending to others. The American Dream, the author was reminding us, is coming to us now in Arabic.

In both books, Eggers’s heroically self-effacing prose opened up the stories of people we blindly walk past in our cities every day. Zeitoun, in fact, was the first in a Voice of Witness series of oral histories through which Eggers is hoping to inform us of those faraway places whose destinies are ever more central to our own. Like Mailer, Eggers seems ready to take America by the scruff of its neck and ask us what we’re going to do about injustice and a sense of community; but where a writer like Tracy Kidder, in his inspiring tale of a refugee from Burundi, Strength in What Remains, gives us America as a home for second lives and triumphant reinvention, Eggers seems bracingly wary of happy endings, as if convinced that our hard work is still ahead of us.

In A Hologram for the King—a kind of Death of a Globalized Salesman, alight with all of Arthur Miller’s compassion and humanism—Eggers at once pushes that project forward and, characteristically, gives us an entirely different and unexpected story. Alan Clay is a 54 year-old self-employed consultant (as everyday and malleable as his name), whom we meet on the tenth floor of an anonymous glass hotel in Jeddah, where he’s come to try to redeem his fortune, and America’s. Day after day Alan is driven, usually late, to a little white tent in the desert—part of the King Abdullah Economic City, or KAEC (as in “cake”)—where three young colleagues sit around with laptops waiting to show a holographic teleconferencing system to King Abdullah, on behalf of Reliant, an American company that is “the largest IT supplier in the world.” Day after day, the king fails to arrive and the Americans lie around, fret about the absence of wi-fi and kill time in the emptiness. Sometimes Alan gets so desperate for something to happen that he lances a cyst on his neck with a crude knife—and later a needle—just to feel the blood flow.

Hologram flashes past in an appropriately quick series of brief, displacing passages with plenty of space around them for us to feel the vacancy and nowhereness; if Norman Mailer attached himself to Hemingway in honor of the older writer’s unabashed competitiveness and macho gestures, Eggers typically draws on his better side, in a style of clean lines and sharp edges. Scene after scene is so clear and precise—“A plume of smoke unzipped the blue sky beyond the mountains,” a “pair of headlights appeared as a blue sunrise beyond the ridge’s rugged silhouette”—that it’s easy to overlook just how strong and well-wrought the writing is.