The Death Of Nuance  >

“Your sentences are so long,” said a friend who teaches English at a local college, and I could tell she didn’t quite mean it as a compliment. The copy-editor who painstakingly went through my most recent book often put yellow dashes onscreen around my multiplying clauses, to ask if I didn’t want to break up my sentences or put less material in every one. Both responses couldn’t have been kinder or more considered, but what my friend and my colleague may not have sensed was this: I’m using longer and longer sentences as a small protest against—and attempt to rescue any readers I might have from—the bombardment of the moment.

When I began writing for a living, my feeling was that my job was to give the reader something vivid, quick and concrete that she couldn’t get in any other form; a writer was an information-gathering machine, I thought, and especially as a journalist, my job was to go out into the world and gather details, moments, impressions as visual and immediate as TV. Facts were what we needed most.  And if you watched the world closely enough, I believed (and still do), you could begin to see what it would do next, just as you can with a sibling or a friend; Don DeLillo or Salman Rushdie aren’t mystics, but they can tell us what the world is going to do tomorrow because they follow it so attentively. 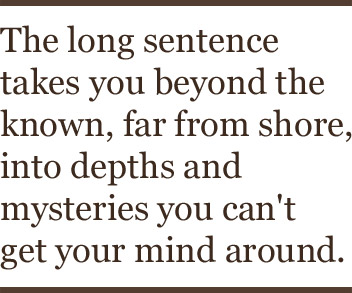 Yet nowadays the planet is moving too fast for even a Rushdie or DeLillo to keep up, and many of us in the privileged world have access to more information than we know what to do with. What we crave is something that will free us from the overcrowded moment and allow us to see it in a larger light. No writer can compete, for speed and urgency, with texts or CNN news-flashes or RSS feeds; but any writer can try to give us the depth, the nuances—the “gaps,” as Annie Dillard calls them–that don’t show up on many screens. Not everyone wants her being reduced to a sound-byte or a bumper sticker.

Enter (I hope) the long sentence: the collection of clauses that is so many-chambered and lavish and abundant in tones and suggestions, that has so much room for near-contradiction and ambiguity and those places in memory or imagination that can’t be simplified, or put into easy words, that it allows the reader to keep many things in her head, her heart at the same time, and to descend, as by a spiral staircase, deeper into herself and those things that won’t be squeezed into either/ors. With each clause, we’re taken deeper, further from trite conclusions—or so at least is the hope—and away from reductionism, as if the writer were a dentist, saying “Open wider” so that he can probe the tender and neglected spaces in the reader (though in this case it’s not the mouth that he’s attending to but the mind).

“There was a little stoop of humility,” Alan Hollinghurst writes in a sentence chosen almost at random from his recent Stranger’s Child, “as she passed through the door, into the larger but darker library beyond, a hint of frailty, an affectation of bearing more than her fifty-nine years, a slight bewildered totter among the grandeur that her daughter now had to pretend to take for granted” (and the reader may notice—though she doesn’t have to–that “humility” has rather quickly elided into “affectation,” and the point of view has shifted by the end of the sentence and the physical movement through the rooms accompanies a gradual inner movement that progresses through four parallel clauses,  each of which, though legato, suggests a slightly different take on things).

Many a reader will have no time for this; William Gass or Sir Thomas Browne may seem long-winded to him, the equivalent of driving from L.A., to San Francisco by way of Death Valley, Tijuana and the Sierras. And a highly skilled writer, a Hemingway or James Salter, can get plenty of shading and suggestion into even the shortest and straightest of sentences. But too often nowadays our writing is telegraphic as a way of keeping our thinking simplistic, our feeling slogan-crude. The short sentence is the domain of uninflected talk-radio rants and shouting heads on TV who feel that qualification or subtlety is an assault on their integrity (and not, as it truly is, integrity’s greatest adornment).