Orhan Pamuk takes the pundit’s dry talk of a “clash of civilizations” and gives it a human face, turns it on its head and sends it spinning wildly. In his early novel, The White Castle, a Venetian slave and his Ottoman master swap clothes, exchange ideas and squabble like siblings till soon you can no longer tell who is who–or who’s on top. “I enjoy sitting at my desk,” Pamuk told the Paris Review, in an interview included in his new book, “like a child playing with his toys.” This gift for taking the urgent issues of the day and presenting them as detective stories that race past like footfalls down an alleyway has made Pamuk at once the best-selling writer in the history of his native Turkey and the deserving winner of last year’s Nobel Prize for Literature, at the unvenerable age of 54. Serving up 16th century murder stories that investigate shifts in the history of Islamic art, offering us seriously entertaining wild goose tales that ask the deepest questions about identity, Pamuk is that rarest of creatures, a fabulist of ideas.

Each of his seven novels is written in a different style and even as you hear echoes of Borges and Dostoevsky and Proust in them, he makes out of the compound something entirely his own. Pamuk sits, as every profile-writer notes, at a desk in Istanbul overlooking the bridge that links–and separates–Asia and Europe, and he has taken on the existential riddles that have traditionally preoccupied European literature and wrapped them up in brightly colored fables, Sufi allegories about the quest for the hidden self, arabesques that could have come from the Thousand and One Nights. By chance, the pressing questions facing both him and his country–how much to define themselves in terms of an Islamic past, how much in terms of a future in the European Union–have, in some form, become the questions haunting the global village as a whole, as more and more of us find ourselves living within earshot of the mosque even as Hollywood movies play down the street. Who better to turn to for illumination than the rare writer who can put Sufism and Hegel on the same page (page 76 of The Black Book, for those who are counting)? 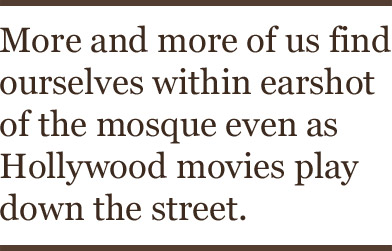 In Other Colors, his first big assemblage of non-fiction, Pamuk gives us all his many selves in a typically centrifugal gathering of memory-pieces, sketches (both literal and verbal), interviews and unexpected flights. The result is what could be called a gallery of Pamuks: here is the author of the haunted, half-lit enquiry into melancholy and neglectedness, Istanbul: Memories and the City, with further glimpses of the “forest of secret stairways” that is his home; here is the man who so loves books that he wrote a whole novel, The New Life, about a character whose life is turned around by a book, with essays on the writers who possess him. Here, too, is the author of the fearlessly topical Islamic novel, Snow, who, two years ago, was brought to trial by his government after telling a Swiss newspaper that it was taboo in Turkey to mention the local slaughter of 1 million Armenians and up to 30,000 Kurds, with public statements on freedom of expression; and here, round every corner, is the whimsical, endlessly inventive juggler of possibilities writing pieces in the voice of the subjects of a painting, and of Meaning itself.

These essays are more an afterword than an introduction to his work–those who haven’t met him before might feel more comfortable beginning with Snow or Istanbul. And though Pamuk (lover of doubles) assures us that this is a different book from the collection that came out under the same name in Turkey eight years ago, newly shaped to form a “continuous narrative” that is also an autobiography in disguise, it feels more like an incomparably rich and suggestive set of explorations than a single story. Yet mostly what this collection gives us, by swiveling the lens from the window out towards the Bosphorus to the man taking it in from different angles, is a chance to savor one of the inimitable literary storytellers of our time, who, as Marilynne Robinson puts it in her classic novel Housekeeping, is set upon a “resurrection of the ordinary.”

Pamuk has two enduring loves: books and Istanbul. Often they converge as his journeys through the snowbound, darkened passageways of his hometown come to resemble excursions through memory itself, and through the baffling labyrinths of Borges. Like Proust, Pamuk has spent almost all his adult life–15,300 days, he here calculates–in the same room in his beloved birthplace, alone with his books and his thoughts. Yet his window is always open to catch the sound of the sandwich vendors in the street, the men in the teahouse, urging him, “Write, journalist, write!”, the metallic whine of the ferries in the Bosphorus as they dock “at any of the little wooden tire-ringed landing stations.” Turkish literature prides itself on its long sentences and Pamuk’s most virtuoso catalogues, some stretching across hundreds of words, take in all the barber-shops, the horse-drawn carriages, the winter afternoons and rainy back-passages of old Istanbul till he seems an Istanbullu Whitman, ready to contain all contrarieties.