I walked through the streets of East Beirut on a Saturday evening, and felt like a yokel suddenly translated to a cosmopolis. Sushi bars and tapas bars and a cafe where girls with glitter around their eyes were deep in this month’s copy of Vanity Fair; boites bathed in blue light, and cigar bars, and dance clubs that should have been in Soho. Rap music was pounding out of the late-model Mercedes and B.M.W.s that jammed the narrow streets, and on every side couples were walking towards the Che lounge, he in black leather jacket, with an air of savoir-faire, she in high white boots, with midriff bare, reminding one that Cleopatra more likely came from Beirut than from Cairo.

In the distance, I could see the heart of downtown Beirut with its arcades more rounded and soignes than in Paris, and illuminated churches and boutiques and palm trees lit up as in a museum display case. People were still buzzing in and out of the huge, mock-ancient Virgin Megastore (open till 1 a.m.), and across from it the spotlit mosque seemed at once place of worship and unlikely fashion statement. 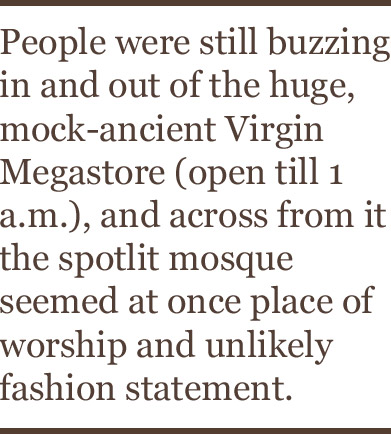 I had heard, over and over–who has not?–that Beirut keeps rising from the ashes of its latest civil war, which ended in 1990, after fifteen years, with 150,000 dead. I had grown up thinking of the city as one of those weathered places, driven by the worldliest of wisdoms, that had managed to survive every change in political climate by bending to the times and making a killing out of chaos. But hearing about Beirut’s reconstruction, I had thought, I now saw foolishly, that it had managed to recreate the recent gilded past in which Brigitte Bardot and Marlon Brando took in the sun in Byblos nearby and the wealthy of the world sauntered down the Corniche, from the Phoenicia Hotel to the Bain Militaire, in the city that provided the entire Middle East with its nightlife and its dreams. I had never guessed that Beirut, characteristically, would be trying to design the future.

What I was seeing might have made New York or London seem retro by comparison, fueled though it was by something of the jumped-up energy of a boy joyriding in his parents’ Porsche and determined to take things fast because the escapade could end at any moment. The parents, in this scheme of things, are history and geography, and they have left Lebanon a tiny slice of a country, only three hours by car from end to end, that is made for people from elsewhere. Over the past 4000 years the descendants of Phoenicia have seen the Greeks, the Romans, the Assyrians, then the Crusaders, the Ottomans and the Europeans, among many others, pass through, and been home to the longtime exiles of Armenia and Palestine and Iran. For traders, this all means opportunity; for the young it means severe rootlessness. When I looked in on the American University of Beirut, I saw that six students were putting on a play they’d written called Fragments. On the striking, ice-cool poster, they had written, “We are ourselves geological sediments, left with no ancient concepts which will come to our rescue.”

Lebanon’s way of coping with this absence seems to be to seek pleasure and have faith in accommodation. When I got into the city, at 3 a.m. on a wet winter evening, a red light beckoned down the steps of the Godfather bar downtown, and the lights all around offered Sushi Xpress, X-rated “super-night clubs” and a shop that said simply, “Me and Me: A Life Philosophy.” When my Lufthansa plane had landed, teams of smooth young men with designer stubble and expensive jackets had shuffled off into the immigration hall, and in their midst had stood a tiny blond girl, no older than ten, traveling alone with a Goldman Sachs backpack and a carrier bag from the Ritz-Carlton Millennium Singapore. “Welcome to Lebanon,” said the sign at the counter where I bought my visa. “Please Count Your Money.”

I took myself down to the aged Mayflower Hotel, a monument to raffish insouciance and resilience, and my dark room came with a love seat and pictures of dallying French nymphs. In the corridors there were old British hunting prints, and in the nicely titled “Departure Lounge” next to the check-in desk, I found memoirs of Cuba, novels by Ivy Compton-Burnett, left by departed guests. The kind man at the desk negotiated a price, and a check-out time (I half expected him to sell me a will), and told me not to use the hotel phones, because they were expensive. The waitress who served a traditional British breakfast in the morning came from the Philippines.