A powerful, unexpected scene glances through the beginning of Colin Thubron’s characteristically beautiful, though uncharacteristically haunted, new book of travel. As he walks through the mountains of Nepal, towards Mount Kailas in Tibet, suddenly he realizes that he’s only 140 miles from Naini Tal, the Indian hill-station whose name rang across his home as a boy, in his father’s reminiscences. His father had been a British soldier in India, he tells us, and the accounts of the father’s hunting trips from Naini Tal, recently excavated by the son, “are as detailed and exact as if he were on campaign.” His father’s hand-drawn maps “are meticulous, even beautiful, and his observations sometimes have the near-scientific exactitude of a Victorian explorer’s.” Maybe, Thubron writes, in a typically brief but resonant phrase, his father on these trips “became solitary, perhaps himself.”

This is a startling moment for those of us who have followed this patient explorer on his majestic series of rigorous and soulful accounts of travels across the great land mass that links the Middle East, Central Asia, China and Russia. For he renders these often forbidding places transparently, and with rare immediacy, precisely by keeping himself mostly out of the picture. Coming across as a model of the elegant, reticent and selfless British traveler of old, he offers records of foreign places at the other extreme from the richly subjective torrent of judgments, sexual confessions, digressions and pop-cultural references we find in a modern American traveler such as Paul Theroux. Thubron all but erases himself in order to give us full and exact observations we can trust.

Yet every phrase of his description of his father could, in fact, refer to himself; it may be the best (though still fleeting) evocation of him we’ve had in his works of non-fiction (in his seven novels Thubron is correspondingly passionate and unguarded). The passage reminds us that, in another age, he might have been exactly the kind of person—part explorer, part uncomplaining soldier, part exquisitely learned civil servant—who helped imperial Britain control and administer such a large part of the globe. It also tells us that, beyond just undertaking a strenuous, life-challenging trip to the 22,000-foot peak that is holy to Tibetans, Hindus, Jains and followers of Tibet’s pre-Buddhist Bon tradition, he is attempting something else in this short, late work: a coming to terms with his inheritance and a facing of those questions, however obscurely formulated, he finds buried in himself. 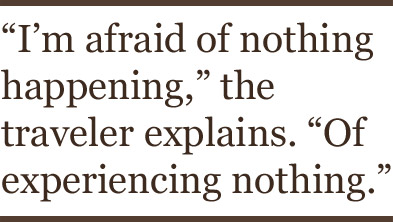 Those who have read Thubron’s indelible works of travel will know something of what to expect in To a Mountain in Tibet. After four short books—on Damascus, Lebanon, Jerusalem and Cyprus—culminating in 1975, he began his epic sequence of comprehensive and attentive excavations of the heart of Asia with Among the Russians, in 1983 and continued through Behind the Wall (about China), in 1987, The Lost Heart of Asia (1994), In Siberia (1999) and, most recently, Shadow of the Silk Road, in 2006. Each work reflects the special gifts of this uncannily observant and self-effacing wanderer: a strikingly deep and thoughtful immersion in the history and culture of the places he visits; a classic readiness to put himself through anything to get where he needs to do (he learns Russian and Mandarin, he travels rough, with nothing and no one but a rucksack and, in Shadow of the Silk Road, he gets incarcerated in a Chinese prison during the SARS epidemic, narrowly avoids a head-on collision and endures rural dentists in Iran performing a root canal operation on him without benefit of anesthetic); and a rare responsiveness to the modest souls he meets along the way, whose plights—of displacement, material need and restlessness—he catches with elegiac sympathy.

In his prose, likewise, there’s a refusal of all short cuts and a craftsman’s chiseled devotion: bespoke adjectives sit next to poet’s verbs and there’s never a loose or careless sentence, or anything written for effect. That you’re in the company of a preternaturally vivid and evocative writer is evident in the first paragraph of the new book: “There was no sound but the scrunch of our boots and the clink of the sherpa’s trekking pole.” Sentence after sentence rings out, to bring us onto the path he’s walking. “Our bodies dislodge cascades of shale or rustle over beds of pine needles. Giant fires and pines surge up between prickly oak and hemlock, and spruce trees hang their pink cones a hundred feet above.” Later, in a scrappy Nepali settlement, “the alleys are twilit ravines. All around us long ladders climb and descend to aerial yards and terraces, and the voices of invisible people sound from the sky.”

He begins his journey, in this new book, in Nepal, in May 2009—during the Buddhist holy month of Saga Dawa—accompanied by a guide, a cook and (to be discarded at the border) a horse man. The first half of the narrative describes his often heart-stopping ascent through the mountains of Nepal to the border with Tibet; the second takes us into the spirit-filled reaches of Kailas, where Thubron is “entering a zone of such charged sanctity that any penance, or any crime, trembles with heightened force.” Seamlessly woven through the day-to-day record are brief, plunging flashbacks to his family’s story, and verbal snapshots of monks he’s met in Kathmandu before embarking on the trip.

It takes a rare soul to describe Kailas in calm and unhyperbolic tones. Hindus believe it to be the haunt of their god Shiva, who sits in eternal meditation there; Tibetans hold that the Buddha visited, and their first kings descended from the sky there. Even the palaces of faroff Burma, the temples of Angkor are modeled on its shape. Each of its sides faces a cardinal compass point and four great rives flow down from within 70 miles of its summit—the Indus, the Ganges, the Sutlej and the Brahmaputra. To complete a circumambulation of it, many believe, is to expiate the sins of a lifetime.

Thubron is impressively restrained before what he likens to a “pious illusion,” even as he remains acutely aware of its chill magnetism (it has never been climbed). He is far from cynical or opposed to belief—if anything, the opposite; yet he is business-like and efficient in dispensing with all wishfulness and fancy. “We have entered holy land,” he writes at one important moment, as he sets eyes on Kailas for the first time, Lake Manasarovar before it; but in the very next sentence, opening a new paragraph, he coolly notes, “Yet the lake is only precariously sacred.”