The last major story that D.H. Lawrence published, six months before his death, was set in the ancient world and, characteristically, preoccupied with resurrection. “The Man Who Died” is a typically wild and visionary piece, sensual and impenitent, about the risen Jesus meeting a priestess of Isis and, true to his Chatterley origins, feeling that he can at last complete himself, as a fully living human being, by joining her pagan rites and having semi-sacramental sex with her. The story is set in a tenderly described Mediterranean world (an early title for Lady Chatterley was Tenderness) and when it came out, under its original title–“The Escaped Cock”– it was published by his friends Caresse and Harry Crosby (he the nephew of J.P. Morgan).

It’s tempting to think back on that story when you pick up The Colossus of Maroussi, Henry Miller’s ecstatic ramble through Greece in 1939 (recently reissued by New Directions); Miller was a lifelong devotee of Lawrence and spent years planning, collecting notes for and finally completing an epic and rather chaotic work on his master. And never does he seem more Lawrentian than when hymning his own resurrection, as here, and, by extension, that of the wider world. The Colossus marks the moment when Miller, then 47, quit the cheap cafes and after-midnight streets of Paris and begun reconstructing himself, without apology, as a latter-day Transcendentalist. Gone are most of the earthy adventures and carnal excitements that made his early books both legendary and long unpublishable; in their place, as he moved towards a new home in Big Sur, are rapturous pronouncements, by way of Emerson, Whitman and surely Lawrence, about the divinity in man and the possibility of an inner renaissance. 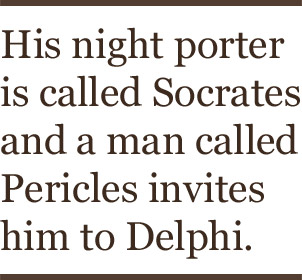 Miller had decided to write a “joyous book of the mystic” before he even touched ground in Greece and, as war began to close in on Europe, to chronicle a “voyage into the light” towards “the heaven beyond heaven.” And for any reader who cherishes the grittiness and robust physical hunger of a 45 year-old boy loose on the backstreets of Paris, the Colossus represents the end of a golden age, precisely as Miller begins to announce, more and more insistently, the coming of a Golden Age. But for anyone who feels that the classic travel-writing of Europe was nearing its end, Miller’s book speaks for the birth of a new kind of travel– suggestible, radiant and distinctly forward-looking–which has today become almost a cottage industry.

Graham Greene, Evelyn Waugh, Peter Fleming and others were journeying to Mexico, Abyssinia and Tibet at much the same time, after all, and most of them, classically educated, a bit detached and taking off for no compelling reason they will admit to, seemed determined to come back untransformed; Miller, by comparison, was so poised for take-off when he set foot in Greece that he hardly stopped to take in the everyday details of the country, let alone the oncoming war. Where the Brits tended to travel, implicitly, as rulers, surveying their terrain and in command of history and a sense of ancient cultures, Miller was coming as a supplicant of sorts, eager to see what the older world could teach him, as he refashioned himself for the future. In his mind, he might almost have been completing a project that Lawrence had begun, and putting a full-throated exclamation mark at the end. For us today his book all but registers the point when America began to eclipse Britain in the world’s imagination and, simultaneously, travel became unsponsored, democratic and driven by a fascination not with the actual but with the inner source of the Nile.

The Colossus of Maroussi is such a head-on assault on the linear that it can be hard to describe in simple terms. On Bastille Day in 1939 Miller boarded the Theophile Gautier in Marseilles to visit his young English admirer and fellow writer Lawrence Durrell in Corfu. He had, with characteristic exuberance (and, some would say, indifference to the world), mapped out for Durrell a huge list of the places he wanted to visit at just the moment war was propelling him out of France, including, among many other points, Killarney, New Orleans, Baghdad, Tehran, Jerusalem, Fez and almost everywhere on the way to and in India, China and Tibet. He had decided to take a short break from writing, to read only spiritual and occult literature and, as his somewhat frowning biographer Mary Dearborn has written, to enjoy “the only true vacation he would ever take.”

What followed was a wild, determinedly subjective series of flights, cries of liberation, rants and set pieces, a great unchaptered outburst of epiphanies and Whitmanic catalogues. Miller babbles about Sherwood Anderson to some dazed Greek writers and pantomimes life on the New York Stock Exchange for a tailor and a vice-consul. He riffs wildly on “a Boogie Woogie man whose name was Agamemnon.” He travels to such sacred sites as Epidaurus, Crete and Delphi and by page 15 is reporting, “I had entered a new realm as a free man.” And he leavens and grounds all this by frequently telling us that the one word he uses for everything he sees—“crazy”—perhaps best applies to himself.

For Miller, “Greece is the home of the gods” and the gods are of “human proportion”—himself, in other words, only more so. “In Greece,” he announces, very typically, “one is ever filled with the sense of eternality which is expressed in the here and now.” So enchanted is the world that he discovers (and longs to see, whether it’s there or not) that his night porter in one hotel is called Socrates and it is a man called Pericles who invites him to Delphi. In Europe he feels “Diana the huntress in the background and the Sphinx waiting for you at a bend in the road.”

In part, therefore, the book is a torrent of superlatives that even the Greek Tourist Board would be hard-pressed to match, a giddy if not always reciprocated love-letter. “Everywhere you go in Greece,” Miller assures us, “the atmosphere is pregnant with heroic deeds.” In Greece, we read, ”one has the conviction that genius is the norm” (though this may not be the impression of every tourist clambering past the merchants of the Plaka, then or now). “Wherever you go in Greece,” we are told, “the people open up like flowers,” though this, too, may be less true for those unprepared to mime scenes on a Wall Street trading floor. “The Greeks,” he has decided, before he arrives in Greece, “are an enthusiastic, curious-minded, passionate people. Passion—it was something I had long missed in France.”

What you quickly see—since relatively few concrete details or individuals interrupt the psalms—is that Miller is less interested in Greece than in the flights and transports it arouses in him; again, like a kind of counter-Victorian, he evinces little interest in the topography, customs or data of the place, and huge fascination with the way it can serve as a catalyst to the awakening of an ancient god within. And true to his preoccupation with the inner landscape, he redeems himself (at least for me) by always making the case against himself just before the reader can do the same. “Along the Sacred Way, from Daphni to the sea,” he confesses, “I was on the point of madness several times.” At another point, he recalls a friend trying to sell him on Rudolph Steiner in Paris and, just as “he was getting onto group souls and the exact nature of the difference between a cow and a mineral,” the two are interrupted by a chorus girl and “a dwarf, who ran a string of whorehouses.”

This element of clownishness is perhaps the one thing that could balance the flights into rebirth (and serve as an inspiration to later fellow travelers in the Lawrentian vein, like Norman Mailer, who likewise lurch between talk of devils and angels and disarming confessions that they are just fools—though foolishness can open doors that wisdom leaves untouched). If in British travel-writing the object of humor is often the native or just the zaniness of travel itself and all that is lost in translation, here the source of comedy is only and always the author, who cheerfully calls his effusions “juvenile and ecstatic.”

The admirer of Tropic of Cancer will pounce on both the saving moments of humor and the unlofty vernacular here with gratitude; “I knew we were going to be gypped,” Miller says, nine pages in, “and I looked forward to it with relish.” Both the attitude and the “gypped” give us what is most engaging about the man at his best. In the middle of one mad flight, he throws in a parenthesis—(“This is a Brooklyn lad talking. Not a word of truth in it, until the gods bring forth the evidence.”)—and it becomes hard to get too exasperated at his raptures about light and the god within. “An American myself,” as he once wrote to a friend, “not just a hundred per cent, but a hundred and one per cent,” he replaces the wry self-deprecation of the classic Brit abroad with a much more zesty sense of himself as a “gentle idiot” (and lets his barbaric yawps at once extend and complicate Mark Twain’s irreverence with an impenitent spiritual hunger).

More than that, Miller is never quite so simple as he likes to pretend. His description of Epidaurus is indeed so luminous and mystical that it may carry some readers up through “the road of creation” to “the peace which passeth all understanding,” even as it leaves others grumpily and unpersuadedly on the ground. But he never forgets that the Oresteia is as much a part of the soil as Apollo, and that “the ancient Greek was a murderer.” Herakleion for him is “a sore spot which one rubs like a horse while asleep on four legs.” Towns in the Balkans come “to an end abruptly, as though the monarch who had designed the weird creation had suddenly become demented, leaving the great gate swinging on one hinge.” Does he contradict himself? Very well then, he contradicts himself. Like Whitman, he is prepared to take so much in with his capacious appetite that much of it crowds out all the rest.