“You’ve got to remember we’re on an island here,” my old friend Nicolas was saying, as unseasonal rains crashed down on Alice Springs, the worst downpour in nine years, and great chocolate-brown currents clogged the usually dry river-bed of the Todd, blocking our way back to our hotel and washing away roads for the moment. “Apart from here, and away from the agricultural zone, I can think of only three towns with populations close to the 20,000 mark in the whole interior. Everywhere else in Australia–everywhere {itals}–is within 200 kilometers of the coast. There’s no one here. Nothing at all.”

We got out of our rented four-wheel drive “ute” and walked across a muddy bridge, for dinner at Hanuman, an elegant restaurant serving roast-duck curry and beef vindaloo and Nonya specialties; the coffee-shop next to it, Balloons, commemorated the town’s status as one of the planet’s centers of hot-air ballooning. I was no longer surprised to find Thai restaurants in the Outback; there are two Swiss restaurants in Alice Springs serving up Indian curries, and the town was, I’d heard, full of “Sudanese–refugees from war–and people from South Africa. We used to have people from Lebanon, too.” For lunch we’d stopped off at the Tea Shrine, where some friendly Singaporeans were offering “Vietnamese Cold Rolls” and Taiwanese Vegetable Chips. 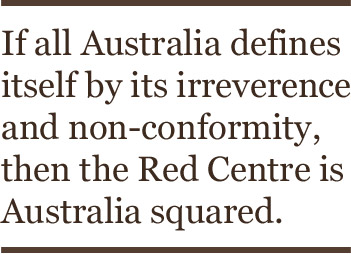 Everything is odd in the desert, of course, and characters stand out against the emptiness; if all Australia defines itself by its irreverence and non-conformity, then the Red Centre is Australia squared, where there’s no longer even conformity to react against. Flying in the previous day, over speckled red earth that poked up through low-lying clouds, I’d half-imagined we were landing on the worn, leathery back of some giant dust-red reptile. When I stepped out into the heat, it was to face an “Emergency Eye-Wash Station” on the tarmac, and a sign prohibiting tomatoes, capsicum and chilies from entering the virgin territory. Inside the glossy terminal, flies were instantly in my eyes and ears, at my mouth. Outside it, Aboriginals sat in circles on the grass, some of them wearing Emirates Airlines t-shirts.

Alice Springs has grown 28 times since the war–when its population barely reached 1000–but size has done little to change its sense of primal, pristine clarity. Much of Australia has the feeling of a true New World (where the U.S. feels, by comparison, used up and parcelled out), its temporary-seeming shacks huddled together in small settlements with emptiness stretching out around them. But in Alice Springs, of course, the elements are unchallenged. The town boasts Australia’s largest truck museum, a winter regatta held in the dry river-bed and even its own gay and lesbian festival–Alice IS Wonderland–but for the most part what it offers, three minutes out of town, is towering red rock and pulsing quiet.

I’d been here twenty years before, but now I was coming back because of what I’d read in Nicolas Rothwell’s incandescent books. A legendary classicist at Oxford, thirty years before, Nicolas had been famous for his dark clothes, his air of mystery and the way he could talk in many-chambered Proustian sentences about every aspect of history, literature, theology and science before he was eighteen years old. He’d grown up speaking French and Czech, and by now had supplemented those with Arabic, Spanish, German and some Aboriginal words; he had covered the revolutions in Eastern Europe and the war in Iraq for The Australian, as well as the wars in Central America; he had spent much of his life living in hotel rooms, deep in unbroken contemplation of Shelley and Darwin and Bach. But now, somehow, this man of very high culture and global sophistication had found his home amidst the thrumming silences and the unworldly apartness of Australia’s interior, a landscape he had begun to immortalise in books such as Wings of the Kite-Hawk and The Red Highway.

Attitude has long been Australia’s largest industry, and in Alice, not surprisingly, it is cultivated in every crevice. A peacock strutted around the Crowne Plaza swimming-pool, and the Yellow Pages in my room pointed me towards the Horny Devils Adult Boutique and a number for “Undercover Wear Consultants.” A Reptile Centre in town was proudly offering visitors the chance to meet “thorny devils, frill-neck lizards, pythons and huge perentie goannas” and as we passed the airport one morning, Nicolas pointed out the huge transport plane that had just come in to provide “5000 Hershey bars,” as he put it, for the American soldiers stationed 10 miles out of town at Pine Gap satellite tracking station. Across from the sudden high ridge that was, he said, a “sacred site,” there stood a K-Mart and a Best Western hotel, with a Drive-Thru Kentucky Fried Chicken parlour not far away.