I got off the overnight train in Mandalay, Burma’s historical city of kings, and instantly there was a swarm of men around me. They were hard for me to tell apart, most of them dressed in white shirts, with wrap-around longhis around their waists, many of them wild-eyed and unshaven after spending all night in their trishaws. Like people in many countries that I’d seen, they were at once trying to arrest my attention and to avoid the attention of all the passersby or seeming passengers (or even fellow trishaw-drivers) who might be making a living by giving names to the police. How to stand out, how to get by, and yet how not to attract notice: it is one of the neverending predicaments in a country such as Burma.

I settled at last on one of them, with a straggly beard and rough, rural features, and we bargained a little on the street. Maung-Maung, as he asked me to call him, had a sign on one side of his half-broken little vehicle, “My Life,” and a sign on the other, “B. Sc. Mathematics.” I could tell that, like many of his fellows, he was bright, resourceful, well-educated, but in Burma intelligence (in all senses) is something to be feared and can best be used by giving oneself to something other than words and ideas. I felt something of the unease that many a traveler feels in such a setting: it was as if I, through no gift of my own, had stepped down off the movie-screen that Maung-Maung and his friends had been watching for most of their lives–an emissary from a land of freedom, possibility and movement–and now they were reaching for me as if I could carry them back to my make-believe world. 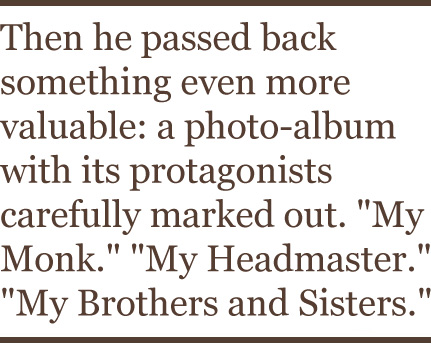 We got into his little trishaw at last, I in the throne at the back, and he peddling furiously, to show me the sights. After a short while, though, he turned off the main boulevard and we started entering unscripted land: the houses grew smaller and smaller, more entangled in undergrowth, and the bustle fell away, so that I felt I was being taken into a kind of underworld. My new friend sensed, perhaps, the stiffening in me, and so he passed back a small piece of jade, as he cycled, and told me that it was a present, for me. A present from the citizen of a desperately poor country to a visitor from the world’s richest? It sounded strange. Then he passed back something even more valuable: a photo-album with its protagonists carefully marked out. “My Monk.” “My Headmaster.” “My Brothers and Sisters.”

I took all this in, and then a final book came my way, in which my new friend had written out his precepts for living: he would always abstain from the toxins of life, he had written, and try to show kindness. Those were the guidelines his monk had drawn for him, he said.

I didn’t know where we were going and whom I was ending up with as he cycled, steadily, into rougher and rougher parts of town–this is the traveler’s predicament, perhaps his excitement–and when we came at last to a tiny hut, weeds growing all around it, I wasn’t sure at all whether I wanted to go in. This wasn’t listed in any guidebook I had seen. Still, I followed Maung-Maung into his home and sat on the bed that his room-mate used at night (a trishaw driver in Burma cannot afford to live alone). Slowly, as if he were pulling out what was true contraband, my friend reached under his bed and pulled out his treasures.

A sociology textbook on Life in Modern America. A faded Burmese-English dictionary, out of which he had copied sentences: “If you do this, you may end up in jail.” “My heart is  lacerated by what you said.” A book of photos of the foreigners he had met, their arms around him, the faraway places they belonged to implicit in the cameras around their necks, the excited gleam in their eyes.

Until two years ago, Maung-Maung told me, he had never met anyone from outside Burma. “Only in movies.” In villages like his own, in the Shan States, people with opportunities might as well belong to another planet. Then he showed me the place in the album in which he had pasted every letter he had ever received from abroad. We sat in the little room on the hot autumn day and looked at stamps and messages from California and Paris and Australia.

I suppose I had been in rooms like this many times already–in Tibet and Colombia and Egypt. Soon it would seem as if most of my life was being spent with people like Maung-Maung, who represent, after all, most of the world. But still I had never met someone quite like this. He passed across an essay–”My Life,” it was titled, as the sign on his trishaw was–and I read of how he had grown up to parents who could never imagine an education for themselves. They had despaired when their eldest son went off to the city–and then had shaken their heads when he took to digging holes for a living, and washing clothes in a monastery. When they heard he had become a trishaw-driver, usually sleeping in his vehicle, they never wanted to hear another word, imagining the low-lifes and street-girls who must be his companions now.

Still, Maung-Maung told me, he dreamed of the day when he would buy an English suit and invite his old parents to his graduation, as he received a “Further Certificate” in mathematics. Possibilities were scant in brutally oppressed Burma, and since the government had closed every door and locked every window, all that remained was such imaginings.