Posted on October 1, 2009 Appear in Criterion Collection DVD of Monsoon Wedding and other short films by Mira Nair Facebook Twitter

So many worlds stream in from every direction in Monsoon Wedding that it comes to seem as if the whole globe is converging on a single family home in New Delhi. Relatives from Houston, from Australia, from Dubai (“Muscat, actually”); workers from villages and rainfalls of marigolds; cousins that no one can quite place and brass bands and white horses and Event Managers and the eventfully managed. “I don’t even know who’s who half the time,” says a groom, in a wonderful moment. It’s as if every kind of mood and genre–dreams of escape and memories of brutality, uncertain futures and promises of a better life–are all converging, too, to make a glorious celebration as teeming and fond and constantly shifting as any uncle’s reunion I’ve attended at the home of one of my relatives in India. 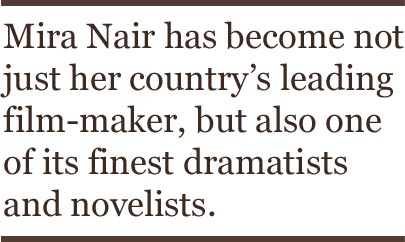 The first time I saw Monsoon Wedding was one day after I had left a large assembly of family and friends in Delhi, and its portrait of real life was so vividly real, and familiar in every particular, that I felt as if I’d never left Delhi at all. I recognized the cool global kids trying to slip away from their families, even as a fussing, anxious father was calling his youngers “idiots” and “fools” (and in one priceless coinage, “Number One Most Stupid Duffer”). Several languages were mingling in every sentence, so that even a two-word curse was sometimes polylingual–”Bloody feranghi,” (dutifully translated in the subtitles as “Bloody foreigner”). Here was all the laughing chaos, the delighted jostle of a country where phone connections suddenly go off in mid-phrase, the electricity flickers into darkness, a downpour threatens at every moment and nobody knows when anybody is coming (“10 min., exactly and approximately,” promises the slippery organizer in the opening moments). And as in any family reunion–in Poughkeepsie as much as New Delhi–the mood is that of a golden castle constructed, step by step, on thinnest ice, as befits the coming together of any people who know–and don’t know–each other too well. Which means that comedy, song-and-dance, romance and the outlines of tragedy also all flow in through Mira Nair’s wonderfully open door.

Monsoon Wedding, made for just 1.5 million dollars, with a script initially drafted in a week and with 300 minutes of film lost (true to Indian form) because of X-ray damage, quickly became one of the top ten grossing foreign films in U.S. history and has been beloved for its warmth, its familial bustle, its radiant colors ever since it came out in 2001. Though shot in “40 locations, 30 days, exactly and approximately” in the mischievous last words of the credits, it soon won hearts around the world, got nominated for a Golden Globe (as Best Foreign Language Film) and was awarded the Golden Lion at the Venice Film Festival. Yet underneath the conviviality and the charm, it is as precise in every detail as a perfectly constructed short story, reminding us how and why the prodigally talented Mira Nair has become not just her country’s leading film-maker, but also one of its finest dramatists and novelists.

She gives us, for example, a quiet and passive-seeming young man who suddenly, in the face of a terrible challenge, finds a wisdom and understanding in himself that humbles us. She shows us a bewildered and beholden older man, whom we’ve taken to be a comic character, and lets him turn the film around with an act of courage that can bring tears to the eye. In a film swarming with characters from abroad, with Englishy accents, the only one with an English name–the servant-girl Alice–is, of course, the only one who can’t speak English. But when the fuses blow, it’s she who comes to the rescue with a single, solid candle.

The Old India, of tradition, villages and changelessness–Alice comes from one of the poorest states in the country, Bihar–quietly holds up the glitzy new India of air-kisses and scorpion tattoos and requests for “Bacardi-and-Coke,” we gather. Yet the drama of the film, as of all of Mira Nair’s movies, is that everything is trembling between the pull of the old and of the new. At the center of Mondoon Wedding is a bride who is torn between her illicit affair with a married man and the marriage others have planned for her. She is every woman caught between duty and passion, but she is also, very specifically, contemporary India, divided between the new possibilities of a global, individual life and the past it’s always believed in. Her secret lover is–no coincidence–a TV presenter, on a show called Delhi.com, and the segment of it we see features a debate on how much India should, or shouldn’t, become global and American. A sari-clad matron pantomimes pornographic moans.

I sometimes think that the most important sentence in the entire film comes right after the final shot, in the simple dedication: “For my family.” The central line of dialogue may well be the patriarch’s moving and heartfelt assertion, “My family means everything to me.” Yet family is also, of course, exactly what the young and the dreaming long to escape–Nair sees the plight of the young as well as of their elders–and the only people who look out of place amidst all the excitement of the nuptial arrangements are, in fact, the prospective bride and groom. They can talk only by meeting secretly in coffee-shop and tea-stall. A scene they share in a car betrays all the frozen silence of an enduring relationship, by comparison with a parallel scene in a car, which catches the humid desperation of adultery. When the bride is found, with her cousin, asleep in a bed under a romantic mosquito-net, one of them, perfectly, is stretched out next to a copy of Cosmo, one next to a book by Rabindranath Tagore.