The Red Highway begins with a spare, haunting account of the Czech artist Karel Kupka clambering out of a plane and (as the book’s first sentence has it) stepping “for the first time into the elusive world of Arnhem Land.” Born in the last year of World War I, and growing up in a cultured family at the centre of Prague’s intelligentsia, Kupka had made his way to Paris in the last year of the next war, got to know tribal art in the studio of Andre Breton and then, somewhat mysteriously, come out to Aboriginal Australia, as if to find his way back to a deeper, purer history that could restore him after civilisation as he knew it in Europe was destroyed in two terrible wars.

Yet the first effect of any open space is to concentrate the eye; when few things are around, you start to pay close attention to every one, and begin to find in each seemingly casual detail a universe of resonance. So it is with Rothwell’s characteristically deep, private and often terrifying work. Kupka was moving under a kind of “compulsion,” we read, and “had pictured himself as an outsider, carrying out profound investigations” in the bush. He was at once fascinated and disquieted by the spirits, the witch doctors, the writhing creatures from the world of sorcery he discovered as he deepened his “advance into the shadows” of Australia’s hidden north. In Darwin he was asked to paint an Aboriginal Madonna for a new cathedral, its predecessor damaged beyond repair by Japanese attacks in war. He did so, but his work was stolen and then returned, a little bruised, and hung so that it could hardly be inspected.

Anyone who has seen the tall, 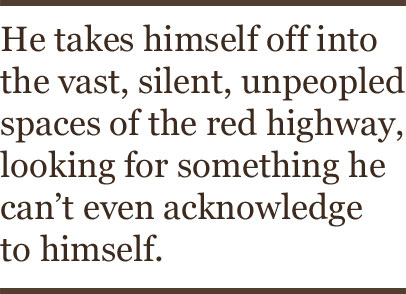 thin, somewhat displaced Nicolas Rothwell may grow a little startled to read that Kupka was “tall, and thin, and somewhat out of place.” Anyone who has read Rothwell’s earlier books – Wings of the Kite-Hawk, Heaven and Earth and Another Country – may feel a penetrating chill when she reads that Kupka, in Sydney, seemed “a pale, transfigured creature, striking through with his words to some uncharted higher realm.” Those who may happen to know that Rothwell is half-Czech and half-Australian will see that there is something more going on here than just the excavation of rich and fascinating history, and the telling of a mysterious fable about an European artist, pushed almost against his will into the secret and oblique silences of Australia’s heart. While recounting a formal, factual, meticulously precise story about a figure trying to salvage something from the magnetic north before it dies – or he does – Rothwell is clearly laying out something much closer to the bone as, again and again, he takes himself off into the vast, silent, unpeopled spaces of the red highway, looking for something he can’t even acknowledge to himself. While flying towards Arnhem Land for the first time, he tells us, Kupka’s plane (the Star of Australia) crashed, which meant that the traveller was stripped of almost everything, and felt that he was now released for a journey into a “new and deeper life,” on the far side of death.

The Red Highway is a masterful and unforgettable book in its own right, spooked and riveting and full of echoes; but it is also just one more part of a huge scroll that Rothwell seems to be assembling, piece by piece, as he fills in the secret history of his continent (and, by potent implication, himself). Much like the late German writer WG Sebald, whom he strikingly resembles in his sombre, attic eloquence, Rothwell seems drawn by his hauntedness deeper and deeper into precisely those places most guaranteed to unsettle him. Over and over he is attracted to figures of melancholy, to intimations of death. Sebald was born in Germany in 1944, son of a Nazi soldier, so everywhere he went in Europe – tramping around England or visiting the cities of Italy – he always seemed to end up either in a churchyard, shaken, or excavating some odd solitary as exiled as himself. Rothwell grew up mostly in Europe, with Australia in his blood, and surrounded by the ghosts and suicides of that used-up world. As he pushes farther into the emptiness at the centre of the oldest continent, everyone he meets seems to have a European past, and nearly everywhere he goes betrays deep scars from World War II. So even as he is pressing into the future, away from the vengeful cycles of history, he is met at every turn by relics from the past, as if everything is conspiring to create a huge tapestry of pain and restoration.

This teaches you to read the book in a very special way, attending with one eye to the vivid, funny, atmospheric accounts of the writer’s often ill-begotten trips into the desert or conversations with old acquaintances who refuse to take him too seriously; and with the other to the secret pattern invisibly developing behind the scenes. Everything has at once an immediate life and a kind of shadow in Rothwell’s work, which means that we devour, say, the details of the story of Henk Guth, a Dutch painter who moved to Alice Springs and began to bring the palette of “the old Dutch masters – deep, rich sepia earths, dark greens and wheat-sheaf yellows” to a scene more often associated with blinding sunlight, dazzled red and cloudless blue. Yet even as we succumb to the spell of the narrative, we realise that this description of importing a shadowed Rembrandt eye to the light-filled surfaces of Australia is, in fact, a perfect distillation of the book we’re reading.