Thirty minutes to the south of the bustling little town of Galle, in southern Sri Lanka, where the single-lane road runs along a palmy coastline, I saw a small island rising out of the Pacific with what seemed to be the turrets of a white castle poking through its trees. I pulled up along the side of the road, and stepped onto the soft, warm sand to get a better look at this tropical Havisham enigma. A little boy, shirtless, poked around in his shorts about thirty feet out into the blue-green waters. Two thin, spidery figures stood at a landing two hundred yards out to sea, in front of a small locked white door. 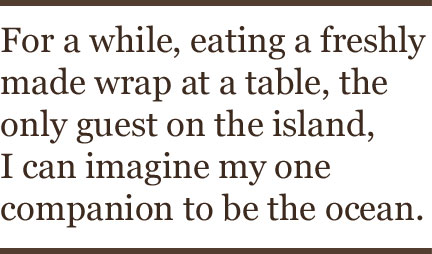 I had been so entranced by the hidden palace, Taprobane, that I had actually asked my taxi-driver to stop during my previous trip to Sri Lanka and had waded out, uninvited, to inspect the famous former home of Paul Bowles and the Count de Mauny-Talvande. Now, however, I was semi-legitimate, so I motioned out to the two distant figures. The waves rose between me and them and, in any case, the distance was too far for a voice to carry. The water came in and in, pooling around my feet. Finally, after about twenty minutes of non-communication, the figures waved at me to stay where I was, and two others opened the white door and splashed through the surf towards the shore, their shorts turning black and water-logged as they did so.

“Your wallet,” warned one, as he arrived by my side, motioning for me to take it out from my trouser pocket.

I took off my shoes and socks, rolled my black jeans up to my thighs and followed the boys into the rising water, my money and my official token of identity threatening to get swept away by the waves. By the time we arrived at the landing, and clambered up onto solid ground and went in past the white door to a jungly garden, I felt like a trespasser on Robinson Crusoe’s island. My trousers were so soaked I could hardly move, my feet were salty and wet, my pockets were empty and I was stepping into a five-bedroom neo-Palladian pleasure-dome where black-and-white photos along the walls showed elephants playing polo and black-tie parties from more than half a century ago, when kings, queens and prime ministers danced the night away here.

Taprobane, fittingly, was once the name for Sri Lanka, or Ceylon, itself. Some say that the little island, just big enough for a single rambling house, mirrors the shape of the larger island of which it is a microcosm. For several decades, though, the name has been synonymous with the dream some of us have of running away from the world we know and living among the elements, surrounded on every side by ocean. The octagonal fantasy was built by the self-styled count in the 1920s, with verandas in every direction radiating out from a 30 foot-high central space. For four years in the 1950s, Paul Bowles cocooned himself on the island, completing The Spider House here before returning to Morocco. At various times it has played temporary home to Somerset Maugham’s nephew Robin, the son of Balthus and Gore Vidal. When Mark Ellingham, the founder of the Rough Guide series, was asked once where on the planet he would most like to go, he mentioned the legendary one-house island across the water from the Sri Lankan town of Weligama.

Since 1995 the house has been the preserve of Geoffrey Dobbs, a spirited sort-of-Englishman who was until recently an entrepreneur in Hong Kong, and who has joined many other expats from Hong Kong and London in buying up and developing the long-forgotten old colonial properties around Galle. (All Galle, a modern Caesar might say, is divided into three parts: a busy modern town of roughly 100,000 souls; the mysterious walled city inside the 17th century Dutch fort, which echoes still with Islamic chanting from a madrasa, men sitting on broken colonial terraces watching the world not go by, schoolchildren walking past the peeling Dutch Reformed Church; and the 80 or so houses bought in recent years and done up by mostly British people into chic shops, high-end cafes and gorgeous hotels, such as the Galle Fort and Amangalla). Dobbs, who started the glamorous Galle Literary Festival two years ago and runs two renovated colonial hotels above the Fort, saw a picture of Taprobane in the ‘70s, in an airline magazine, and, after years of patience and negotiation, rented it for five years and then acquired it outright fourteen years ago as a place to invite writers, hold parties and preserve a sense of dolce far niente.

Two minutes after I step into the airy lobby of the main house, he is calling me on his mobile to offer a welcome, one of his five-person staff is handing me a towel and a Coke and I am looking into the former count’s bedroom, said to be haunted by something more than just an eerie large portrait of its former occupant. I follow steps around the island down to an infinity pool, to shaded little corners where benches or chairs have been placed, so that everywhere seems a labyrinth of privacies. Then I am guided down to the “Glass Room,” below the central building, which is furnished with a four-poster bed, a copy of Graham Greene’s Nineteen Stories and the constant sound of the sea.

It comes in from every side in the room, the splash and curl of the water breaking against the rocks not many feet below. Birds call from the trees and when I walk up to one of the many terraces around the main house, I can look out across the water towards where it ends at the South Pole. Part of the special magic of Taprobane is that the life of the world, only 200 yards across the water, is visible and audible–I can watch the coloured fishing-boats resting on the beach, hear the buses and auto-rickshaws buzzing past, catch echoes of the excitement of a soccer-game on the sand. And yet, at the same time, it feels a world away, as if one were an emperor living behind a moat.

The hours that follow feel equally human and yet displaced. For a while, eating a freshly made wrap at a table, the only guest on the island, I can imagine my one companion to be the ocean. Then my host appears with two distinguished writers. We sit among books and bottles as night falls–absolute darkness on one side, the lights of the road on the other. Later, led down to a lower terrace beside the sea, we have dinner for fourteen at a table lit by small torches, more remote than in any hotel. It is like staying at a country house staffed by flame trees, frangipani and waves.

For those who want a once-in-a-lifetime adventure–or Bacchanal or honeymoon–it’s possible these days to rent out Taprobane, for roughly L600 or more a night (depending on the season). But it’s worth recalling that Sri Lanka has always been an ambiguous Eden for foreigners. Paul Bowles, Taprobane’s most literary owner, devoted his life to writing of how the visitor gets swallowed up by the foreign, and what began as an innocent-seeming excursion turns into an auto da fe. Leonard Woolf, not many miles away, felt himself surrounded, almost devoured, by the enfolding jungle, his Sri Lankan novel A Village in the Jungle beginning, ““It was in, and of, the jungle; the air and smell of the jungle lay heavy upon it – the smell of hot air, of dust, and of dry and powdered leaves and sticks. Its beginning and its end was in the jungle…”

D.H. Lawrence, perpetually searching for an Eden that perpetually dissolved inside his head, raged against Buddhism and the frenzies he witnessed on the island, suggesting to him “the days before the Flood.” Even the unflappable Jan Morris noted, when she visited, long before Sri Lanka’s 26 year-old civil war had broken out, that the island suffered one of the highest murder rates on earth.

I sat in my room and watched a trail of red ants walk across the marble-white of my balcony. Crows jumped around the pool, scooping up nuts or pieces of stray bread. The clunk of the water-pipes in my bathroom sounded like a bugle summoning me to dinner. I remembered how Bowles had been fascinated here by the presence of large bats, their wingspans three feet wide, and delighted in the fact that the two-acre island had once been a dumping-place for cobras. Being here was like living inside a writer’s head, as the sound of the sea, incessant and constantly changing, came at me from every side.

“It’s terrifying,” said the eldest writer in our group (famous for her writing on Virginia Woolf, among others). “These people are living next to a killer. It’s their neighbor, and they never know its moods.” I thought back to how a local had told me about the day, four years earlier, when the sea had just come in and in–encroaching 300 yards onto the shore, and burying houses, whole villages and scores of lives. On the eastern shore of Sri Lanka, the 2004 tsunami had seen waves advance two miles onto the land. Meanwhile, on the near shore, just down the street, as it were, a father was taking his son by the hand and leading him out into the foaming ocean. Anyone who wants to savour the potent charm of Sri Lanka can hardly do so more hauntingly than by coming to Taprobane, where you taste the runaway dream you may always have harboured–and the threat, rising with the crash of the ocean, of being swept away by it and drowned.