The Snow Leopard is an account of an expedition high into the seldom-seen Himalayan land of Inner Dolpo, to record the habits of the bharal, or rare Himalayan blue sheep. The book begins, as most scientific logs do, with a precise map, and ends with scholarly notes and an index. The leader of the climb is the eminent field biologist George Schaller (here known as “GS”) and with him travel various local porters and Sherpas and the writer who records the trip, Peter Matthiessen. The author, a “naturalist, explorer,” as his bio has it, takes pains to record every “cocoa-coloured wood frog” the travelers pass, and the “pale lavender-blue winged blossoms of the orchid tree (Bauhinia).” He records altitudes and temperatures and the history and geography of every region he passes. The human habitations he describes are, typically, full of “vacant children, listless adults, bent dogs and thin chickens in a litter of sagging shacks and rubble, mud, weeds, stagnant ditches…”

Yet even as it makes us feel every pebble and rag on the tough journey, The Snow Leopard is the record of a different kind of ascent as well, which the reader catches as a silent current pulsing just beneath the lines. “I climb on through grey daybreak worlds towards the light,” its author tells us at one moment, and a little later he is in a world of “snow and silence, wind and blue.” The journey is clearly to places inwards as well as up, and as the author climbs and climbs towards his final way-station, at 18000 feet, near the Crystal Mountain, the writer seems so to disappear inside the vastness of the scene around him–the crystal skies, the deep blue silences, the elegant clarity of a world of snow and rock–that it begins to feel as if those forces are speaking as much as he does. “The earth is ringing. All is moving, full of power, full of light.” 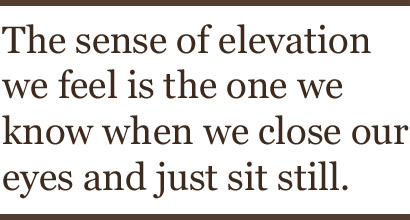 The book is written, you begin to sense, by a serious-self-taught scientist (who trained himself by driving for five years around his country and producing a near-definitive book on Wildlife in America). But it is also being written, in the same breath, by one who will later become an ordained Zen priest, whose business it is to see past all the projections and delusions of the mind to the hard rock of unvarnished reality. It is written by a seasoned journalist of the old school whose range is so great that he can light up the paths he is taking by referring to Blake and Heisenberg and Sufi and Native American lore, drawing his epigraphs from a Hindu priest, a modern lama, Hesse and Rilke and Ovid; but it is, in those same sentences, being written by a novelist who seeks to track the nature within us as well as without, and, indeed, to link the two. The ascent is an attempt, we see, to chart what cannot be seen and recorded, and the sense of elevation we feel is the one we know when we close our eyes and just sit still.

What comes to seem remarkable, and haunting, about the book has little to do with the fact that few travelers had been to Inner Dolpo in 1973, or even that no one, Peter Matthiessen suggests, had ever recorded the voice of the blue sheep before he did, as he’s observed by the animals from a distance of ten yards, before they return to pushing their noses into one another’s rumps. It comes, perhaps, from the sense that we feel, with him, the heart-shaking sense of discovery that arises when you come upon passes and places that have almost never been seen before; and yet, in that very moment, you also feel a sense of loss–that excitements fade, that everything moves on, that animals and forests will soon be no more and that even the epiphanies and discoveries that seemed so exhilarating yesterday will very soon be forgotten.

If you visit the high plateaus of the Himalaya–perhaps moved by the book to do so–you come upon great many-storied buildings on the hilltops that look out across the emptiness like fortresses and watchposts both at once. If you step into their chapels, you smell centuries of melted yak butter, make out frescoes barely visible in the faint light, feel coldness on the bare floors. The sun comes in shafts through the dust, lighting up the Buddhas. And as you walk around these cities on a hill, you begin to notice that each level is linked to the next by a short, steep ladder. You climb up, through terraces, past kitchens and altar rooms and schoolrooms, till finally you come to a flat rooftop from which nothing can be seen or heard but the snapping of prayer-flags in the wind, the blue skies extending all around, the snowcaps in the distance. You have entered, as The Snow Leopard shows us, a realm of allegory.

When I return to Peter Matthiessen’s silver account today–noticing how it grows as I do, giving back a different light every time I pick it up again–what I feel most is the sheer physicality of the climb, the return to something bare and essential (behind or beneath the realm of thoughts). The author shaves his head as he sets out, and begins to walk barefoot as he leaves the world of roads. He makes us feel and flinch from the blisters on the climbers’ feet, the leeches at their skin. I shiver, such is the transparent immediacy of the prose, when the temperature sinks to -20 degrees Centigrade, and feel with the author how “I quake with cold all night.”

Part of the beauty of such a trip is that it permits few vanities: the writer is reduced to scrambling on all fours and watches himself laboring under sixty pounds of lentils. He starts to go to sleep at nightfall and to awaken with first light, like the living things around him. The porters, at one precipitous moment, give themselves over to a silent trance. The trip is not taking them away from the real world, you see, so much as deeper into it, the better to feel its sting; epiphanies, after all, for most of us are the easy part–it’s the acceptance of the everyday that comes hard.