Perhaps it’s a sign of the times that the artist most constantly invoked on my first day at the Sydney Readers’ and Writers’ Festival this spring was not Patrick White or Orhan Pamuk or W.G. Sebald, but that mumbling icon known as Robert De Niro. “I don’t want to start thinking of novels as if they were just film-scripts in disguise, waiting for Robert De Niro,” a best-selling novelist whose latest book seems eminently filmable told me over lunch. I turned around, to meet a Lebanese writer from Montreal who had just published his first novel, about his country’s civil war. What’s its title, I asked. “De Niro’s Game,” he said, with magnetic intensity. “As in Robert De Niro.”

At breakfast three hours earlier, the most memorable moment had come when a novelist told me he had actually received a call “from Robert De Niro’s people, from the set of The Good Shepherd. They wanted to tell me, ‘We’re going to get Paramount to option your book.’ ” The convergences were so memorable–and unexpected–that I began to wonder if there was a part for the man who made Travis Bickle a household name in my upcoming book on the Fourteenth Dalai Lama.

Perhaps this all says something about Sydney, too, though (since I certainly hadn’t had conversations like this at similar festivals in Edinburgh, Auckland a week before, or even L.A. the previous month). It is, pre-eminently, a city on show, a place of bright, seductive exteriors; where Melbourne prides itself on its secrets, its privacies–everything that can be discovered only on second, or twenty-second, meeting, in its sometimes rainy and certainly weathered interiors–Sydney is a city that advertises itself right off with everything it discloses on arrival: the floating light sails of the Opera House, the heady blue (and for the most part unpolluted) skies, the blondes who drive their red sports cars with the top down through the Central Business District (or “CBD,” as its sparky nickname has it). 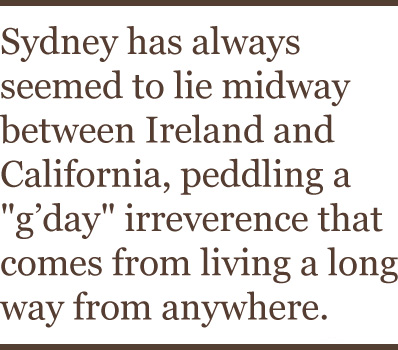 A Los Angeles without fuss or urgency, a San Francisco alive with the alfresco pleasures of the moment–tapas bars along the wharf where all the tanned bodies and free-and-easy fashionistas park themselves on couches under the gorgeous skies–Sydney might be a billboard for the Good Life in its latest sleek, hyper-visual incarnation. The city has always seemed to lie midway between Ireland and California, peddling a “g’day” irreverence that comes from living a long way from other people’s standards and codes, and making up its rules itself; even in its sparkling new multicultural duds, it can have the (fresh) air of a London that’s got a tan, scrubbed its face very clean and shed its clothes. Bankers head home from work on the ferry in white shirts and backpacks, and when you look up amidst the new high-rises, what you see, at end of day, is a huge moon rising over tropical palms.

The “tyranny of distance,” as it’s been called, gives Sydney, like the country around it, its own unimpressible savour, just like the man beside me at a very formal lunch who, as soon as a speaker began talking of her Pentecostal girlhood, whipped out a business-card on which he was identified only as “Atheist.” Jesus “is the only one who gives you spirit without damaging your liver,” announced the sign outside the church as I drove in from the airport, turning the same bravado in the opposite direction. Two tall blond boys were walking hand-in-hand among the skyscrapers as I disembarked at my hotel, insouciant advertisements for themselves. And when I went up to the gym at the Intercontinental–at 6:00 a.m., no less–it was to find the whole city laid out in panels through the wall-length windows, as rugby players and P.R. girls burnished their strengths and the city and its stunning vistas–blue, green, white–played out like streaming video through the glass.

Sydney, in short, is openness, unasbashedness, the girls in white, the men with shoulder-length locks arranging themselves in yoga positions along the walk from Bondi Beach to Bronte at first light, as perfectly framed against the rising sun as posters for a Club Class New Age world. “In Melbourne we believe in keeping everything behind closed doors,” a theatre director from that second city assured me. “You see a street that’s completely empty, and you go through an alleyway and come to an inner courtyard. Sydney thinks heaven is a pair of ugly shorts.”

Even though she was trying to put down her urban rival, though, she couldn’t help confessing that “there are many people in Melbourne who would love to live in an English vicarage. Their image of heaven is a small plot of green, sipping tea with Jane Austen with their pinkies raised.” Sydney, she might have been saying, is really, by contrast, a city of the future, a shiny, three-dimensional trailer for the pleasures of the new century, Wallpaper magazine extended across a series of picturesque suburbs. “We believe in seasons in Melbourne,” she went on, “in textures, moods. Things are turned inward for us, back towards the past.”

At the same time, none of this makes Sydney an obvious home for the word. The city, like the continent it cradles, is more and more famous for supplying the global screen with its most potent talents–the Nicole Kidman or Toni Collette who have become among the most commanding figures in our planetary Hollywood precisely because they can play to perfection Californians or old Britons or themselves. Fox Studios notoriously makes many of its “American” movies in Sydney these days, and the Sydney Film Festival was arriving in town the very week the Readers’ and Writers’ Festival subsided (festivals themselves a way a city shows itself and its unofficial pleasures off to the world). Yet the people we are more likely to associate with Sydney are the ones–Elle Macpherson, Hugh Jackman, the imported Naomi Watts–whose very beauty tells us that they were raised in that part of California that comes equipped with irony, intelligence and a natural acquaintance with the world.

I had not seen Sydney when I arrived to share my words since 1988, so naturally I was startled most by how much the city had become part of the larger world, less an afterthought than a major player that just chooses to regard London and New York from the blithe, ironic distance of a boat out on the harbour, looking back at the puffed-up skyscrapers. Twenty years ago, the centre of the city seemed just a small cluster of grey buildings surrounded by green parks, the engulfing harbour, the hourly attraction of the skies; now Sydney is much more obviously a grown-up, plugged into the global circuit, bristling with importance and post-Olympic confidence, as able to position itself near the centre in a cyberworld as any European city with a thousand years of history, or any Middle Eastern place that just happens not to be ten thousand miles from the other famous cities.