It begins as a shock. A hooded figure is seated in the dark, so close to us that he seems to be made of wood. The camera pulls back to disclose a single form kneeling against a bare wall. There’s no patter, no background music, very little movement: you’ve entered another country, in this silent, snowbound building, with its own distinctive language (the language of silence, and of sunlight). Each long, unwavering take is a still life that says there’s still life—vibrant, shifting, human life—in this other world. The only thing that’s likely to move is you.

Very soon, though, even you are moving more slowly, as the film does, and you are paying attention to every detail, as the camera does. Bells begin to peal, a monk is shown snipping some fabric, another sits motionless with a book. As the prolonged, exact images go on, you start to notice the texture in the wood, to see how the light slants across the floor, to hear birdsong in a sunlit garden. When a clock begins to tick, you not only hear it but seem to breathe it. A clatter of monks assembling for prayer sounds like thunder. Then one of them begins to sing, and the music is transporting. 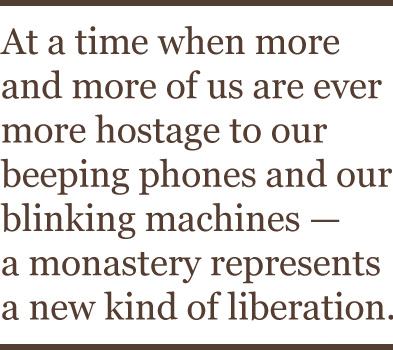 Into Great Silence (a direct translation from the German would be “The Great Stillness”) is probably not like any film you’ve seen before, though it has some of the meticulous patience of the reveries of Terrence Malick and some of the uncompromising intensity of Andrei Tarkovsky. It’s less a film than a meditation, a 162-minute observation of life in La Grande Chartreuse, a thousand-year-old charterhouse of Carthusian monks in the French Alps. There is no story here or script, and certainly no characterization. Yet it does just what films are meant to do, if you think that films, like all good art, are meant to transform. By the time you leave the theater, you many find that, as the movie’s repeated refrain has it, a heart of stone is turned into a heart of flesh.

At a time when more and more of us are ever more hostage to our beeping phones and our blinking machines—our agendas, in short, and the chatter and clutter of the world—a monastery represents a new kind of liberation. It fills up the spaces that information can’t touch, and it speaks to those parts of us that feel we cannot engage with the surfaces of the world until we have built a solid foundation from which to put those surfaces in place.

I have been spending much of my adult life in a monastery, and sixteen years of sometimes visiting on retreat, sometimes staying within the cloister, have shown me that the contemporary world offers no more abundant and transporting kind of trip (neither the Caribbean nor Santorini nor Bhutan can compare). Christian monasteries may be losing numbers, Buddhist retreat centers may be filling to the point of overflow, but the basic human hunger for space and spaciousness—a larger whole (and a deeper reality) into which to fit all that we see and are—will never die.

Maybe that’s why in the New York Times, of all places, this movie was described as “entrancing,” and no less than Variety, the organ of Hollywood, called it “exhilarating.” In a world where we sometimes seem sated with complexity, simplicity can pierce us with new intensity. In 1984, the director of Into Great Silence, Philip Gröning, asked the monks if he could film them and received a green light all of sixteen years later. They would be happy if he joined them, the white-hooded fathers said, so long as he attached no commentary and came to live with them for several months, carrying his camera and sound equipment alone and in silence. To make a movie about a monastery, they might have been saying (as many a Zen master would), you have to become a monastery.

The point of monasticism, in this age as in any, is to take you out of the world of time (and change and loss) and back into the realm of the changeless. The anonymous monks we follow through their seasons in the film, therefore, do very little other than what their counterparts would have done in the Middle Ages (and very much what their Zen colleagues do around Kyoto, where I write this). They chop wood and kneel down to pray. They feed the local cats and pray again. They tread the hallways of the silent cloister pushing a big clangorous cart, delivering lunch boxes to the monks in their cells. Once a week they are permitted to take a walk in the fields nearby. You feel a wild release as the men suddenly clatter out into the sunlight, gossip and gambol in the snow, and talk about other monasteries like boys on holiday.

The camera records all this not as if it were offering a documentary on life within an old enclosure, but as if it were being carried by a member of the cloister, showing us his world from within. We feel and share the strain as one father, very elderly, clomps about and almost falls in the snow, shoveling and shoveling in the depths of winter to make a clearing. Then, as the season changes, we watch with him as the seeds he’s planted begin to shoot up from the ground he’s cleared, and our heart lifts with the sense of seasonal fulfillment.

It’s all a metaphor, in short, and indeed part of the beauty and mystery of any monastery is that it teaches you to see everything metaphorically. The monks cutting one another’s hair are trimming one another’s vanity and claims to individuality. The black and white cloaks they wear represent nothingness. Toward the end of the film, one blind monk speaks, to say that he regards even the taking of his sight as a blessing; it’s not what you see that matters, in a sense, but how. Everything’s an adventure when you’re in love.

There are certainly many other movies that could have been made about a community of hermits—I think films of like Kundun or the films of Khyentse Norbu. Into Great Silence declines to explore who these men are, what lives they’ve left, what doubts come to them in their long, silent nights. It does not dwell on the charity that arises from their meditations, and if you want to find out some of the inner clamor beneath the surface stillness, you’ll have to pick up a book by Thomas Merton, or by any of a number of Buddhist practitioners. Yet instead of developing, the film deepens. Before long, as in any monastery, all sense of division dissolves.

“You have seduced me, O Lord, and I have let myself be seduced,” says the line from the Bible that comes up again and again, filling the black screen, in between the images, and though the origin of the line is Christian, you might as well be in the realm of Rumi or Rilke (or, for that matter, Leonard Cohen). Names themselves, the distinctions between one doctrine and another, are one of the first things that dissolve when you enter silence or a film about silence. Really, this is a film about surrender, and the love affair every one of us has with the invisible. When each of the monks in turn stares back at the camera, unmoving, we search in vain for answers in the light-and-shadow that looks back at us.

Indeed, the power of a film like this—a silent film in a sense much richer than we usually understand the term—is that it deals with something deeper than we have words or ideas for, whatever lies at our source, beyond and behind a sense of you and me. It is what you see when you watch a Peter Brook play—Hamlet produced on a bare stage, with Indian and Iranian music, and rearranged by the director to resemble a metaphysical soliloquy; what you feel when you lose yourself in an artwork by Bill Viola—Catherine’s Room, for example—which compresses all of human life into five panels in a monastic cell; what you sense when you listen to U2, and their sonic landscapes carry you far beyond the realm of what’s right and wrong, what ought to be done, or what out to be undone, into a larger dimension.

The point of a motion picture, after all, is to move you and take you somewhere that you’ve never been before. And the deepest point of a movie is to show you real life. Into Great Silence challenges—by transforming—our very sense of what is real and what is life, reminding us that the world is no more, finally, than the perspective from which we look at it. As the movie goes on, it becomes clear: This is not about twenty men in white in an old building in the Alps. It’s about you and me and that part of us all that sometimes we fail to see through the mind’s oscillations and distractions. Here is the rare film that goes so deep into the practice of Catholics that it might as well, in the end, be a film about Buddhists.