What I love about Kyoto is the night. Almost every visitor to the ancient Japanese capital, home of geisha and tea-ceremonies and kimono and 2000 temples–is shocked by the first view, as she steps out of Kyoto’s ultra-modern train station, with an eleven-storey department-store and a luxury hotel attached: the “City of Heavenly Peace,” the home to rock gardens and straw-sandalled potters is, on first encounter, a huge, concrete, sprawling mess of skyscrapers, larger than Detroit.

As you thread your way through its clangourous streets, in and out of arcades crammed with yellow-haired girls in micro-skirts and boys in hip-hop clothing doing their best to impersonate 50 Cent (or 50 Yen at least), as you negotiate narrow lanes thick with McDonald’s outlets and Laura Ashley shops, more Kentucky Fried Chickens than you ever see in London or New York, and those things that are not Californian often mock-Californian, you may reasonably wonder why you’ve left your home in Islington, perhaps, to come to a poor copy of Islington, but with signs you can’t read. The only foreign things to hit you are the wrong things: the fact that there are no real street addresses to speak of, that none of the signs makes any sense (in their mix of three different Japanese alphabets) and that the ones that are ostensibly in English make the least sense of all.

Gleaming “tea-rooms” called the “Cafe Selfish,” temples adorned with vending machines offering you Coke and strawberry-flavoured Fanta twenty-four hours a day, 7-Eleven oulets (it’s now a Japanese company) thick with mango-flavoured Aero balls and bottles of Creap creamer: it may be “Lost in Translation” material, and it may speak for Global Culture, J-Pop division, but it’s not what you spent L 600 to come and see, usually.

But just wait. Remember that the Japanese gift is for patience, and for accommodation of everything high and low, alone and in unfathomable combinations. Recall that the language the Japanese speak best is silence. Consult the page in your guidebook that says (as all guidebooks to Japan say) that one key to the Japanese sensibility is the short book by the novelist Junichiro Tanizaki called “In Praise of Shadows.” There’s a reason why traditional Japanese houses don’t have locks, and shoji paper screens allow you to see everyone else only in silhoutte, as outlines. The reason you’ve come all this way is to visit a place that has advanced further than any other in refining the notion that the best way of speaking is by saying nothing at all and the best way of seeing something is leaving a lot to the imagination.

Position yourself, therefore, along Sanjo or Shijo Bridges, at the very centre of town (you can even position yourself by a window at the Starbucks that now commands perhaps the choicest location in town, where the historic street of Sanjo-dori meets the Kamo River). Look to the east, as the sharpened light catches the cluster of trees and rounded hills of Higashiyama, the Eastern Mountains, which look shockingly close (and can, in fact, be reached in about eight or nine minutes on foot). Even ascend to the ninth-floor “Playland” on top of the Takashimaya department-store for that central Kyoto moment that we call “dusk” (and that centuries of local poets have called “tasagare” or the “Who are you ?” time). 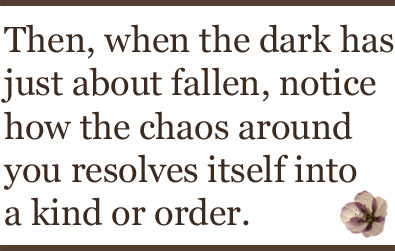 Then, when the dark has just about fallen, notice how the chaos around you resolves itself into a kind or order. See how the lanterns outside the wooden buildings along the river convert a clamourous, jumbled space into a setting out of a Yasunari Kawabata novel. Notice how the lights are smaller than in almost any other country, dimmer, more alluring. The less you see of someone or somewhere, the more enticing they often are.

Walk out, then, into the classic geisha district of Gion. Along the narrow, red-lanterned alleyway of Pontocho, fortune-tellers at their little tables near the many-storied love-hotel, with illuminated lanterns and a readiness to tell you whether you’ll find love somewhere in the shadows. Walk up Shijo-dori and then down Hanamikoji-dori to the south, through the last few wooden tea-houses, whose charm has everything to do with the fact you can’t quite make out who’s sitting behind the near-transparent windows, or what is betokened by that pair of twinned slippers in the reception-hall.

Wander up, and up into the hills and you’ll forget that you ever wrote that postcard home saying, “You wouldn’t believe Kyoto! It’s just ten-floor tower-blocks and streams of taxis.” Through the great orange torii gates of Yasaka Jinja, the shrine that has heard the prayers of women of the night for more than a thousand years, and then past the massed white lanterns of the central shrine, up into the hills towards the Sannenzaka area, which leads all the way to the great hillside temple of Kiyomizu.

I defy you to say that you’re not now in a Japan you might have associated formerly with the romantic woodcuts of Hiroshige. You’ll still find vending machines, of course (some of them selling bottles of whisky); the taxis will still be purring outside 300 year-old private tea-houses, and the traditional handicraft shops along the pilgrims’ slope will still proudly display pictures of 17 year-old nymphets who are the local equivalent of the Spice Girls. Your fellow pedestrians will most likely be chattering away on Hello Kitty cell phones, while wearing, with their school skirts and blouses, thick white loose socks that make larger statements about their claims to looseness.

But as you follow impulse into lanes that are almost deserted, as you come out into Maruyama Park, and see only the suggestions of windows and pagodas leading up into the hills, as you walk along the sleekly polished streets of shops, giving old Japan a chic new finish, you will, I think, realize you’re not in Kansas any more.

I arrived in Kyoto twenty years ago, to live in a place as different as possible from the England and the California where I’d grown up. As soon as night falls every day, I know that what I can see and understand is ringed by a much greater dark that represents, excitingly, all that I do not and will not ever know.

6 thoughts on “What I Love About Kyoto”