I once drove one hour out of central Los Angeles, along the infamous 10 freeway, clogged with long-distance trucks and low-riding gang-mobiles as it moves into and through the dark industrial areas of East Los Angeles towards the desert, and turned off the barreling eight lanes at a small road in a college town. Following a riddle of residential streets in a non-descript neighborhood, I came at last upon an almost unmarked road, and started driving up, around turns, higher and higher, till all I could see were tall conifers, the occasional cabin, mountain slopes above. Very soon there was nothing man-made visible; nothing, in fact, but rock and road and what could have been snow on the ground.

Turning into an empty driveway at the top, I found a slope of pine trees and a dark hall in which a 91 year-old, shaven-headed man from Japan was leading twenty or so shaven-headed men in black through a rigorous Zen training as punishing as anything in the army. No sleep for seven days, as many as sixteen hours of meditation between one sunrise and the next, walks barefoot around the freezing trees at midnight, to keep themselves alert and sharp. Everything I thought I knew about Los Angeles was forgotten–or reversed. 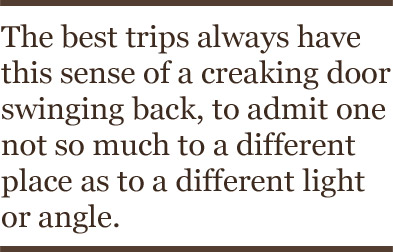 And yet the journey into the mountains was akin to a passage through a hidden gateway into a whole other universe hiding out within the one I knew. The best trips always have this sense of a creaking door swinging back, to admit one not so much to a different place as to a different light or angle, from which the places one knows look back at one, transformed.

It was also a reminder, easily forgotten if one looks at posters and postcards and the latest incarnation of Baywatch (shot in Vancouver), that in L.A., as in Rio, or along the Cote d’Azur, all the secrets lie in the hills. Drive down towards the beaches if you want to enter what can feel like a stage-set, with golden sunsets along the pier in Malibu, and oil-chested body-builders preening themselves on Muscle Beach in Venice, or sandy-haired kids with leathery skin taking the waves at Redondo or Huntington Beach as if the Beach Boys had never left. Drive into the hills if you want to see real life, or California before it had a sense of itself.

The lowlands in Los Angeles are just that: they are the place of clotted freeways and long stretches of murky boulevard, running between broken motels and look-alike mini-malls, those areas so infernal that, as they say, “you can’t even see the mountains” through the smoggy air. L.A. is home to an “industry,” and even if it is an industry of make-believe, it is one fuelled by exorbitant amounts of warehouse space, cars and trucks and dolleys, all the stuff that keeps Wilshire and Santa Monica Boulevards in a constant state of congestion and agitation.

Around this always ruthless business is an ever more complex cluster of half-intersecting neighborhoods speaking Korean and Vietnamese and Spanish as it sounds in El Salvador, people drawn by a dream of Los Angeles that shows only the curving coastline and its long horizons. Los Angeles is in the unhappy state of presenting you with a snarl of overlapping freeways all curling around billboards that broadcast the pristine, cloudless, orange-tree Los Angeles that you never see off-screen. The few relatively idyllic areas (Bel-Air, the Malibu Colony, Marina Del Ray) are all gated.

But head into the hills and you leave all that behind. You’re freed from the burden of the Los Angeles that’s selling itself in the image of what it longs (or used) to be. Screenwriters and movie-stars famously hide out besides the winding roads that snake up into the Hollywood Hills, or along the few streets that cut across the passes, such as Mulholland Drive (home to Nicholson and to Brando once) or Topanga Canyon (home to Joni Mitchell’s “Ladies of the Canyon”). But the hills I am speaking of are even farther back, near Mount Baldy, where the Zen master holds his silent training camp, or even in the high places behind Caltech, where scientists keep their observatories, relics of a time when Los Angeles was famous for the clearness of its skies.

Every famous city, like a movie star who’s been told to act herself once too often, has to be stripped–freed–of its sense of what it’s meant to be if you are to enjoy it. In the hills of Southern California you find retreat-houses, hiking trails, the coyotes and mountain lions who, displaced by human habitations, wander more and more down into shopping-malls to seek their prey. But what you most find is California before it was discovered. You can smell the anise everywhere; the potholed, two-lane roads become avenues of wild-mustard, and even golden poppies, in the spring; the dry, bare slopes and the brush remind you of a time before the cowboys arrived.