This is what an English country town might look like, you think, after it had been emptied out by a nuclear disaster, and airlifted down upon a dry and semi-tropical Californian landscape. The buildings are one or two storeys high, no more, and the eentre of town runs out almost before you get there; the cathedral in the state capital is roughly the size you expect of a country town in Shropshire. There’s no sense of hustle-bustle anywhere, and the world, as driving, real-life concern, feels a universe away. This is what living in a zoo might feel like, in a beautifully-landscaped, wild, lush place, lavish with green parks and the pleasures of an alfresco life, with buses that run free, streets that are clean and empty and pelicans, as the city’s distinguished novelist Tim Winton writes, that “hung over the freeway like billowing newspapers.” 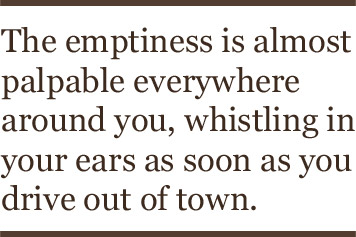 Almost as soon as you arrive in Perth, you will hear that it is closer to Singapore than to Sydney (geographically, but also, you soon come to see, culturally, too); then you will be told that Western Australia is the largest state in all the Empty Continent, eating up a third of the land, while housing scarcely more than 1.9 million people (put more dramatically, the Kimberley, in the north of Western Australia, boasts a population a third the size of Wembley Stadium when it’s full, scattered across a territory three times the size of England). And the emptiness is almost palpable everywhere around you, whistling in your ears as soon as you drive out of town, charging the red-dirt paths with an almost ancestral sense of intensity. The first thing you have to do on arriving in Western Oz is readjust (or simply give up on) your sense of scale, and realise that the world is spherical; it takes less time from Perth to fly to Dubai, or to Johannesburg, than to Tokyo.

To travel across Australia, from Darwin to Tasmania, from Cairns to Ayers Rock, is to confront a desolation, an elemental wildness so extreme that you get used to oddity on the one hand, and ancient emptiness on the other. To come to Western Australia is to see Australia’s Australia, in a sense, the emptiest, quirkiest, and most unworldly corner of the whole otherworldly continent. Near Broome, to the north, there is an 80 Mile Beach which, true to its name, snakes around the milky green-blue waters for a seeming eternity, unremittingly white and completely unpeopled. The nearest McDonald’s to the little settlement, the centre of the world’s pearling industry, was, until recently, almost 400 miles away. Goods are trucked in from Perth, a drive of 27 unbroken hours.

Australia, you will often hear, is the most urbanised society on our planet; what that is a way of not quite saying is that its few human habitations are huddled up in little corners, with the vast, enfolding wilderness all around. “NO FISH OR MANGOES TO BE CARRIED ABOARD,” says the sign in Broome’s tiny hut of an airport, and the 13-mile beach nearby tells you how to call the police if bitten by a box jellyfish. “Miles and miles of beach,” as a sadistic Taliban commander in Khaled Hosseini’s The Kite Runner says, of the “slice of heaven” that is Western Australia, where his parents now spend their days playing tennis and golf. “Green water, blue skies.” The counter-Afghanistan, he might have said, where a lifestyle culture is built on the edge of red vacancy.

It’s no surprise, therefore, that fully a third of the population of Western Australia is foreign-born, and Korean accents mix confoundingly with Cockney ones till you give up trying to match a voice to a face. The central pedestrian arcade of the state capital seems to be filled with more Japanese kids than you’ll see in Osaka, ostensibly here to study English, but really come to escape the straitened compartments of their home country and lose themselves in open space. Along a walkway in the great grassy space of King’s Park, overlooking Perth’s rivers, commemorative stones are offered up by “the Macedonian Community of Western Australia,” the Bahai Office for the Advancement of Women, “the Burmese Association of Western Australia.” Soon, you’re no longer surprised to see mango frappes served up in the local McDonald’s, and halal o-bento shops in the central mall.

Yet even with all these foreign flourishes, Western Australia remains the place where you can see Australia naked, in its pure, essentialised form. Fly up to Broome, the tiny colonial outpost in the middle of tropical wilderness–two and a half hours in a Qantas Boeing 737-400, and you’re still in the same state!–and you see tens, hundreds, actually thousands of miles of red-dirt emptiness below you, running, without warning, into the gorgeous green waters of the tropics. The ramshackle pearling town is still filled with the Japanese, the Chinese merchants and the Aboriginals who made it in the last century the capital of 80% of the world’s pearling industry (at a time when Broome had only 5000 people, it had 400 pearling luggers going out to sea regularly). Not First World, really, or Third, but 13th, perhaps, the sort of half-dreamed place where people arrive and are never seen again (because they’ve fallen out of the rat race, or been swallowed up entirely by the elements).

“Beware of waves breaking over groyne,” says the sign at Cottesloe Beach, only a few minutes from central Perth, and in Western Australia more than anywhere, you can meet a blunt and brawny Angle-Saxon lingo in which words seem to have been scuffed and cut short by the spaces all around. The lovely, white-sand island of Rottnest, 45 minutes by boat from central Perth, here becomes “Rotto”; the pretty, low-slung port of Fremantle, 30 minutes away, all brightly coloured expresso cafes and girls sauntering past the “Backpackers’ Resort” in pearls and flip-flops, is called “Freo.” The Australian language mixes casualness and compression to turn family members into “rellies” and what Americans call shades into “sunnies.” A single page of the brawny, sea-splattered prose of Tim Winton will give you “bong” and “pukes” and “hoiks” and “swag,” “thrums” and “clanks” and “drone” till you’ve attained a kind of 4 X 4 poetry (“As a nurse she’d copped a swill of curses”).

For a few days in Western Australia recently, I drove up to New Norcia, a whole town run by 14 monks, who at times over the years have controlled more than a million acres (and even now own more than 5000 sheep). For ninety minutes driving up to the “bush oasis,” I saw (on a summer Saturday afternoon) not a single other car. Another day, I went to the wine country just north of Perth, in the Swan Valley, and saw a vineyard that is no more than a shed with sprinklers on top, and two picnic benches laid out beside the grapes where visitors can more or less pick them from the vine.

Australia’s great blessing, its promise has always been, as I see it, this sense of unfinishedness, the openness that comes from being a work-in-progress, with one foot in the future. It is America without a care in the world, the somewhat purposeful “How you doing ?” of California turned into the more rambling, “How yer goin’ ?” And Western Australia enforces that sense of female (pretty, sun-dressed) surfaces most visibly inhabited by men (boisterous, tough and matey). Australians mock and undercut themselves to get the pretensions out of the way at the outset, but underneath the swagger and the attitude there often seems to be a real, almost grudging sensitivity (“Please do not ask for key,” says a sign outside the Greyhound station outhouse in Broome, in the unmistakable cadences of Russell Crowe, “as refusal might offend”).

In Western Australia, you can see, more powerfully and lyrically, than anywhere in New South Wales or Queensland, how “feral kids,” as they’re locally known, stalk the subway stations and shiny arcades of the sunniest state capital in all of sunny Australia. Open the yellow pages on a bright and stylish afternoon in Perth, and you’ll find that the “Dogs” section is much longer than the entry for “Churches,” and travels from “Complete Dog Management” to a “Mobile Dog Wash,” by way of “Perth’s Only Doggy Day Spa,” which provides “Body Wraps” and “Skin Treatments” for Rover. The most refined and pampering pleasures of a comfortable city set against constant reminders of the wilderness just inches away (the “Pest Control” listings in the phone-book cover three and a half pages). When I flew out of Western Australia, I picked up at the airport a list of saw all the things I could not bring back into this fragile, deeply rugged country. “Electric flyswats,” said the notice, “blowpipes, knuckledusters, nunchakus and cobras.” The shrinking violet, I thought, will never be the state flower of any part of Australia.