To live in Japan without eating Japanese food seems an advanced kind of heresy. My sushi-loving friends in California regard me as a lost cause; my housemates in Japan simply shrug and see this as ultimate confirmation — me dragging at some lasagna in a plastic box while they gobble down dried fish — that I belong to an alien species. I grew up in England, I tell them, on boarding-school food, no less; I like Japan at some level deeper than the visible (or edible). They look away and try not to scream.

Yet the habit that has won me complete excommunication on both sides of the world is my readiness to eat (twice a day) from Lawson, my tiny local convenience store in Nara, the old Japanese capital. A convenience store speaks to many of us of all that is questionable in modern Japan: a soulless, synthetic, one-size-fits-all lifestyle that the efficiency-loving country has perfected to the nth degree. It marks, most would say, the end of family, tradition and community as well as the advent of a homogenized future that has many people running for ”slow food.” 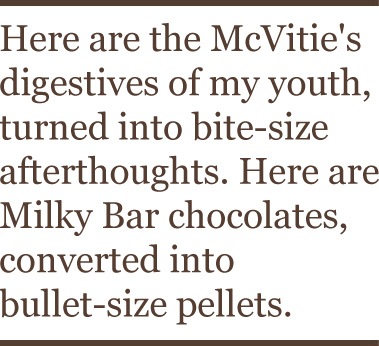 The convenience store is a model of Japan in miniature: the triumph of function over fuss and of ease over embarrassment. Just as you can buy whiskey, eggs, pornography and even (it is said) women’s underwear in vending machines, so you can all but live in convenience stores. I pay my phone bills and send my packages through the local branch of the national Lawson chain (named after the defunct American Lawson); I buy my bus cards there and tickets for Neil Young concerts. I make the convenience store my de facto office, lingering by the photocopier for hours on end and then faxing an article, say, to New York. Yet the first law of Japan, even in Lawson, is that nothing is what it seems, and that you can find all the cultures of the world here, made Japanese and strange. Here, in the four thin aisles of my local store, are the McVitie’s digestives of my youth — turned into bite-size afterthoughts. Here are Milky Bar chocolates, converted into bullet-size pellets. Here are Mentos in shades of lime and grape, cans of ”Strawberry Milk Tea” and the Smarties I used to collect as a boy, refashioned as ”Marble Chocolate.” Were Marcel Proust to come to Lawson, he would find his madeleines daily but made smaller, sweeter and mnemonically new.

It’s common to hear that Japan has created a promiscuous anthology of the world’s best styles. And the convenience store is the center of this. Tubs of Earl Grey ice cream, sticks of mangosteen chewing gum, green-tea-flavored KitKat bars: they’re all here in abundance (though, in fashion-victimized Japan, no sooner have I developed a fondness for KissMint chewing gum ”for Etiquette” than it has been supplanted by ice creams in the shape of watermelon slices). And even the smallest chocolate bar comes with an English-language inscription that, in the Japanese way, makes no sense whatsoever, yet confers on everything the perfume of an enigmatic fairy tale: ”A lovely and tiny twig,” says my box of Koeda chocolates, ”is a heroine’s treasured chocolate born in the forest.”

In modern Japan, the convenience store is taken to be the spiritual home of the boys in hip-hop shorts and the girls with shocking yellow hair and artificial tans, who try with their every move — eating in the street, squatting on the sidewalk — to show that they take their cues from 50 Cent and not Mrs. Suzuki. The door of my local Lawson has badges to denote police surveillance, and where the great 20th-century novelist Junichiro Tanizaki praised shadows (nuance, ambiguity, the lure of the half-seen) as the essence of the Japan he loved, Lawson speaks for a new fluorescent, posthuman — even anti-Japanese — future. And yet, in the 12 years I’ve lived on and off in my mock-California suburb, the one person who has come to embody for me all the care for detail and solicitude I love in Japan is, in fact, the lady at the cash register in Lawson. Small, short-haired and perpetually harried, Hirata-san races to the back of the store to fetch coupons for me that will give me 10 cents off my ”Moisture Dessert.” She bows to the local gangster who leaves his Bentley running and comes in the store with his high-heeled moll to claim some litchi-flavored strangeness. When occasionally I don’t show up for six or seven hours, she sends, through my housemates, a bag of French fries to revive me.

The Japanese are so good at keeping up appearances that few signs are ever evident of the series of recent recessions. But over the years, I have seen poor Mrs. Hirata’s husband (the store’s manager) open his doors around the clock and take the graveyard shift himself. The place started to stock tequila-sunrise cocktails in a can, and little bottles of wine. Soon even the Hiratas’ two high-school-age sons were being pressed into service (unpaid, I’m sure).

It’s no easier to understand Japan in Western terms than it is to eat noodles with a knife and fork. Yet it has been evident to me for some time that the crush of the anonymous world lies out in the temple-filled streets; the heart of the familiarity, the communal sense of neighborhood, the simple kindness that brought me to Japan, lies in the convenience store.

Early last year, writing an article on paradise, I surmised that my modest neighborhood could be improved only by the addition of a cinema, but given the laws of human longing and limitation, such an arrival would probably mean the end of my favorite convenience store. Be careful of what you write. Days before my article came out, a sign appeared on my local Lawson, announcing it was going out of business. Almost everyone in the neighborhood was shaken, but no one knew what to do. (How to express your gratitude to a convenience store?) We’d watched the owners’ sons grow up while their parents served up bags of chicken nuggets in three spicy flavors.

I went home, found a set of elegant bowls I’d bought in case of a sudden need for a wedding present and returned to the store. They were being transferred to a far-off shop in the countryside, Mrs. Hirata said; she feared for her kids. She was even afraid of going out there herself. Then I handed over the box, and she realized why I had come. She began to waver for a moment, then turned away from me and put a calzone in the microwave. A true Japanese to the end, she wanted to protect me from her tears.