You touch down two and a half miles above the sea, in the world’s highest international airport, and the city below is a bowl of shining light cradled between snowcaps. The cholas, or Indian women, are tromping along in their multicoloured ponchos and bowler hats as if no one had told them that this was the 21st century. The signs on the buses say, “Oh, beautiful La Paz,” while the graffiti on the walls assures you that God is on his way. You drive down into the high, exalted capital, shockingly clear under Tibetan blue skies, and, bumping over pebbled, barely paved backstreets, notice the “Video Club Shrek,” the Jerusalem Pharmacy, a shop named after Ringo Starr. And then you get out along the flower-filled Prado that runs through the center of the city, a green promenade, and wonder which century exactly you’ve landed in. 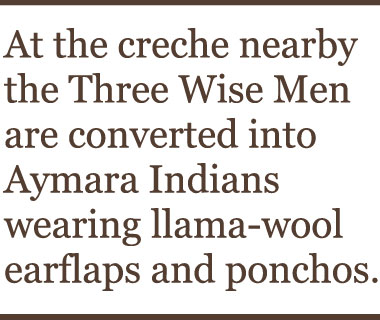 A central restaurant nearby is called “Dumbo.” The taxis are chugging along at an almost human pace, with “Droopy” written on their tops. At the central San Francisco church, a shaman is placing a golden bowl, upside down, on an Indian woman’s head, while at the creche nearby the Three Wise Men are converted into Aymara Indians wearing llama-wool earflaps and ponchos. There are shacks along the main drag selling old Barry Manilow CDs, Sony micro-TVs and copies of the Bhagavad-Gita, but they are manned by more of those Indian women in bowler hats. It’s easy to feel as if Bolivia has staged a reconquesta of its own, upending the Spanish Empire–upending even the very thought of forward motion–and plodding serenely and steadily back into the past.

All of us travel in space in order to travel in mind; to go to places we’d never see amidst the clutter and familiarity of our daily lives. But many of the best trips for me involve what is really a journey in time; we move across centuries when moving across borders and end up in a place where the issues of the day are turned on their heads. Bolivia is to my mind the sweetest, most unspoiled and engaging country in South America, the continent’s hidden jewel; but what that is really a way of saying is that Bolivia is the country that is most itself, inhabiting a different universe–a parallel century–to our own.

If you consult your local newspaper, or World Bank website, you will read that Bolivia is the poorest country in the Americas, outside of Haiti, and that it sits in the Guinness Book of World Records enjoying the unhappy distinction of having had more changes of government than any country in history (188 in 157 years). The red-brick houses spreading across the hills around the airport have made the shanty-town of El Alto the fastest-growing city in South America. And yet little of this seems to touch the daily life of a capital that is slower and more human than any metropolis I know. Even the Lonely Planet guide to Bolivia notes that walking along the Prado on a Sunday afternoon, when the main street is closed off to traffic, is like recalling a “bit of lost childhood.”

Peru, to the north, is one of the many Latin countries that seems to have one foot in the 16th century, and one gingerly extended towards the 21st, forced to attempt a kind of splits that few countries can pull off. Argentina to the east longs to be a part of Europe with its fashions and its psychotherapists, though its up-and-down economy and politics confirm that it is a part of Latin America. Bolivia sometimes seems to be the most quintessentially Latin American country on the continent precisely because it aspires to being nothing other than Bolivia. You will find no English-language newspapers or magazines on its streets. In many parts of the countryside (including a village clinic where I ended up this year), not even Spanish is spoken. Even the chic areas in the affluent suburbs of La Paz called the Zona Sur still rejoice in such Indian names as Calacoto, Cotacota and Achumani.

I went to Bolivia to see in the New Year this year, as I had done three years ago, in part because Bolivia throws the very notion of a new year into question. The first time I came here, in 1975, the magical ruins of Tihuanaco, 44 miles from La Paz–a few engimatic statues and walls in the midst of the vast emptiness of the Altiplano, nothing visible but the huge shadows the sun is throwing across the mountains and a few stick figures in the distance–I was amazed that so little had been excavated of a complex and mysterious civilization that had flourished here for 18 centuries or more (from 600 B.C.E. till the 13th century after Christ). Returning thirty years later, I found it no different than before. Cervantes, the father of Quixote, tried in vain to become mayor of La Paz once; Queen Victoria at one point opined that Bolivia did not even exist.