The Promise Of America  >

America, in all the myths, is the place where the future begins, first settled by pilgrims who wished to leave the past far behind them. That sense of broad horizons is what has always drawn people from the Old World (myself included) to its shores–the sense that in America you can live in the optative mood, not as you are but as you would wish to be. “America is a country of young men,” said Emerson, who celebrates his 200th birthday this week, and seems as fresh as ever (to which his sometime disciple Oscar Wilde added, more drily, “The `youth of America’ is their oldest tradition”). In the world’s imagination, what happens in America today will next week–or next month–be around the world.

To those caught up in the realities of the moment, in Detroit’s inner city or in an old person’s home in Mississippi, that future can seem like an empty promise, and in its extremest form–what we call California–it can seem no more useful than a lazy daydream on a summer’s afternoon. But everyone needs to believe that there is somewhere where we can repose our hopes, and with the old cultures having used up their credit rating long ago, thanks to centuries of oligarchy or war, America has fit the bill even (or especially) for those who’ve never been here. 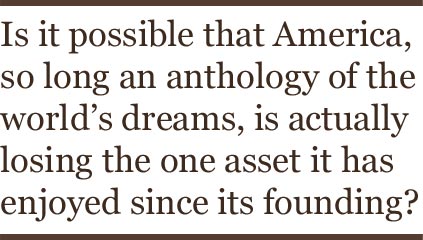 And yet, just recently, a suspicion has begun to arise that, as Yogi Berra immortally put it, the future ain’t what it used to be. The space program, a perfect metaphor for America’s conquest of the future–high technology married to high idealism–plunged to earth with the Columbia. The computer industry, hailed overnight as the solution to all the problems of mankind, proved, inevitably, to be a product of mankind. The once soaring stock market made “futures” a dirty word from which people recoiled, thanks in part to the stabs of terrorism (terrorism’s diabolical logic, of course, being that the future can be undone if the present is unsettled). Even the buildings that once symbolized Manhattan’s forward thrust towards the heavens are gone.

More profoundly, people in the Old World have begun to mutter that the dark side of an abolition of the past is that it leaves one with a hazy understanding of the future; America, they say, is mired in the moment that its pop-culture celebrates. Meanwhile, the European Union, the very bastion of the old, is surging towards a trans-national future, with as many as ten new applications for membership on the horizon. Canada, home of the global village, is fashioning new ideas of community, through its government and its artists, and the biggest surprise for a visitor to Toronto or Vancouver is that they make New York and Los Angeles seem positively old-fashioned. Even the grand old powers of Asia, famous for their conservatism, while not showing much taste for theorizing about the future, show every sign of wishing to claim it and make it happen tonight.

Is it possible that America, so long an anthology of the world’s dreams, is actually losing the one asset it has enjoyed since its founding ? That its fixation on the urgencies of technology and politics have got in the way of the higher necessities of vision ? Could it be, in fact, that America is less able to offer a blueprint for the future than in the days of Tocqueville (who noted of the “land of wonders” that in it “every change seems an improvement”), or even George Marshall ? Certainly the son of the president who so famously lacked the “vision thing” seems to have a much clearer sense of how he would like the world to be than of how it really might be. Even his triumphs in Afghanistan or Iraq do not seem predicated on a clear sense of where Kabul or Baghdad will be two years from now.

No one, I would guess, is going to start projecting her hopes onto Germany or Canada or Japan, even if Berlin is serving up cutting-edge culture and Japan is making the niftiest gizmos around. America’s visions of the future (in The Matrix or even The X-Files) may be shot in Sydney or Vancouver, but the imagination still conceives them to be American. Indeed, the self-perpetuating nature of dreams means that America will continue to be an emblem of the future, and so attract the best and most forward-looking minds from everywhere who will make that notion come true. The future can always be imported.

But unless the country works on expanding its attention span, or crafting a vision that lasts longer than a special effect, it may find that the future stretches no farther than next week.

One of the unsettling things about the war on terrorism is that those striving to keep the peace seem to be thinking in terms of months, while those seeking to wreak havoc are thinking in terms of eternities. And even though more people than ever may believe that America is the future and owns the future, as the world’s lone superpower and policeman, that does not seem to inspire the optimism it once did. In most parts of the world, the future remains a luxury; in America, as Emerson continues to suggest, it’s a necessity, on which the rest of the world depends. See the future as a season, and you leave the present permanently on edge. Which is, in fact, exactly what the terrorists want.