Leonard Cohen’s songs, a friend said recently, offer “music to die by,” and as soon as I heard that, I realized one source of their Buddhist radiance. Death, loss, renunciation toll through every stanza of the benign hymns of passage on his latest record, Ten New Songs, and yet they’re accepted, even embraced, as warmly as the love and life that have preceded them. When a poet of sixty-seven releases a new set of songs, it’s a safe bet that they won’t be about the classic pop themes of “Love, love me do,” or “Baby, we were born to run,” and indeed these new songs are all about the need for letting go. Cohen sings with the sober wisdom of one who’s been living with death for quite a while now.

When the record begins–as is more and more the case as Cohen gets on–one’s first response is, likely, shock. His voice sounds as if it’s emerging from the far side of the grave: a distant, muffled growl, as of a door slowly opening (or, in this case, more likely, a door creaking shut). The sound is spare, to the point of minimalism; the beat, even more than in early Cohen, is funereal. His croaks issue forth over a basic, leaden drone that sounds as if it were recorded (as it was) in a friend’s back yard late at night; much of the time, the singer’s bass profundities are almost drowned out by the sweeter sounds of his colleague Sharon Robinson (her husband, Bob Metzger, is the only musician on the record, playing a faraway guitar). Whatever rock ‘n’ roll was intended to convey, I think, it was never meant to carry a sound as worn and old and rough as this.

Yet as you begin to settle into the very particular mood that develops–that of a cabin, high up on a chill mountaintop, in the dark, a single light on inside–you see that it is in the raggedness that the radiance can be found. There is a crack, as Cohen sings on a recent album (following Emerson) in everything, and that’s how the light gets in. The opening song here, “My Secret Life,” tells us, in effect, what to expect–for the secret life this singer confesses to is not one of venality and deceit and ambition, but the opposite. His secret, at this point in his life, is not that he’s fallen, but that he occasionally manages to rise above it all. The mystic’s way in every tradition is to invert the world by remaking the very terms with which it presents itself (turning its words upside down as a way to turn its values inside out); Cohen’s secret life (since he’s as impatient with the dogmas of the monastery as with those of the world) is the place where he makes love in his mind and refuses to see things in black and white. 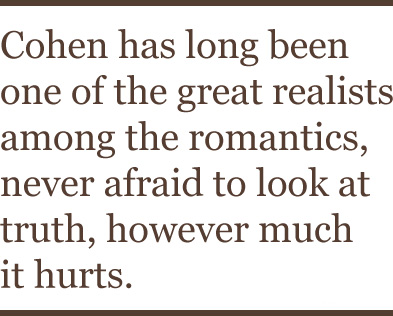 As the songs go on, you see that, at some level, that’s what they’re all about. Babylon and Bethlehem–his favorite themes, his favorite places–but seen in a new light because Babylon looks different once you’ve been to Bethlehem. Cohen first met Joshu Sasaki-roshi roughly thirty years ago, and since then they’ve been drinking buddies, friends and, in their maverick way, student and teacher. For much of the Nineties Cohen actually went to live near Sasaki at his Rinzai Zen monastery in the high, dark, spartan hills behind Los Angeles, cleaning up, doing odd jobs and cooking for the Zen master. He says (almost with pride) that he’s come down from the mountaintop now–“I am what I am,” announces one song, and another speaks of how certain “gifts” can’t be exchanged (his gift, one assumes, being for worldliness)–and yet one feels that he would only leave the monastery once he was sure that the monastery would not entirely leave him. For much of the record it feels as if Mount Baldy Zen Center itself–or the meditation hall–is growling over the music.

The result is that we, too, have to let go, of all our easy assumptions and pieties. The second song, “A Thousand Kisses Deep” tells us again how the whole parade of human endeavor looks different if you see it in the light of death (or eternity: the terms hardly matter). We claim a small victory here and there, we think we’ve taken a step forward, and yet it all means very little in the face of our “invincible defeat.” And yet, even as we move towards oblivion, we go back to “Boogie Street” (or Samsara, as it’s usually called), and when we fall, we “slip into the Masterpiece.” You can’t renounce a desire until you’ve lived fully through it, and Cohen, who sometimes has the air of having entertained as many desires as a whole community of monks, has always been a believer is embracing everything fallen, the better to let go of it. As the opening line of the next song announces, “I fought against the bottle / But I had to do it drunk.”

Cohen has long been one of the great realists among the romantics, never afraid to look at truth, however much it hurts. Indeed, part of his strength comes from the fact that he’s always written so openly about his losing battles with women and intoxicants and the less exalted parts of himself. Here he brings that same merciless clarity to the very platitudes of the pop song. “I know that I’m forgiven,” he sings later in the third song, “But I don’t know how I know / I don’t trust my inner feelings–/ Inner feelings come and go.” The next one opines, beatifically, “May everyone live,” and then goes on to add, “And may everyone die. Hello, my love, / And my love, Goodbye.” In a sense, these are anti-pop songs, not least because they nearly all seem to end in emptiness, the void. And yet it is a nothingness that the singer manages to accept with calm.

The sound, as always, is sepulchral, and Cohen has always had an after-midnight quality to him (one reason why the reality of suffering pulses through them); and yet in the earlier songs, one always felt that he was delivering his ragged intimate confessions to someone else (a young woman, most likely, with a bottle nearby). Here it feels as if he is thoroughly alone, talking only to the dark. Lovers of the renegade adventurer will still find him kneeling at the feet of women, and talking of “getting fixed,” and yet there’s less of a sense here that these pleasures will lead to anything, or solve anything. Writing of death, he presents us with the least unsettled (the most composed) songs you could imagine; there’s scarcely a trace of wistfulness or self-pity on the whole recording.