Rohinton Mistry writes what could be called Neo-Realist novels, in honor of the simple, rending tales of struggle and affliction that distinguished the Italian films of the early Fifties (and continue to this day in, say, the films coming out of Iran). Though Mistry has lived in Toronto since 1975, when he emigrated at the age of 23 to work in a bank, his four books are all set in a Bombay that he recreates and agonizes over with the rapt attention of a homesick exile. Unlike many of the writers of the South Asian diaspora, he doesn’t engage in manic pirouettes, or god-filled flights of fancy; instead, with patience and meticulous compassion, he gives us deeply human stories of people trying to find the right answer in a world that seldom offers such. Reading him, you are less in the company of Salman Rushdie or Arundhati Roy than in that of Victor Hugo, perhaps, or Thomas Hardy.

It is typical of Mistry that he has steadily expanded his range, with each of his books, to the point where now he seems essential. His first work, Tales from Firozsha Barg, in 1987 (released in this country with the more or less generic title, Swimming Lessons), laid out his territory, in a way, by giving us small, everyday vignettes from an apartment complex in Bombay peopled by Mistry’s own group, the Parsis, or minority Zoroastrians, who, pushed out of Persia in the 7th century when Islam took over, have long lived and flourished around Bombay. His first novel, in 1991, Such a Long Journey, took one such story and extended it to the length of a medium-sized book, giving us a tale of two Parsi friends and the larger corruption they’re drawn into during the upside-down days of Indira Gandhi’s dictatorship in the Seventies. His next novel, A Fine Balance, in 1995, was a 600-page masterpiece that took us so deeply into the lives of four residents of Bombay, especially a pair of tailors, struggling to make a living on the city’s streets, that few readers who put it down will forget it. To my mind the strongest novel to come out of India in English, the book was chosen by Oprah Winfrey as one of the final selections of her Book Club, and, like its predecessor, shortlisted for the Booker Prize. 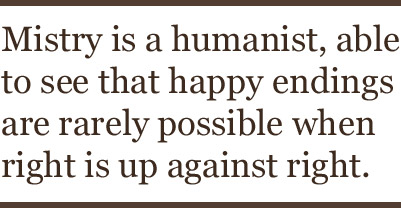 In Family Matters–the title, typically, is at once defiantly plain and quietly punning–Mistry returns to a much smaller canvas in a story that turns upon he travails of a Parsi family in the Bombay of the Nineties (though it could, in almost every respect, be the Bombay of the Seventies in which his other books are set). Nariman Vakeel, a 79 year-old retired professor of English Literature, suffering from Parkinson’s, is staying with his impatient stepdaughter Coomy, and a dithering stepson Jal, when they decide that they can no longer put up with the difficulty of tending to an incontinent old man. Devising a plan to foist him upon their endlessly patient stepsister Roxana, they transport their victim, a wry and gracious presence throughout, to the tiny two-room flat that Roxana shares with her husband Yezad and her two children Murad and Jehangir. Nariman, given to quoting from Shakespeare and Jonson, is not the only one who detects a comparison, very quickly, with King Lear.

To some extent, that is the thrust of the whole 439-page story. There are flashbacks, here and there, to Nariman’s thwarted love for a non-Parsi girl in his youth, and unravelings of other secrets from the past, but with Mistry one always feels that his interest lies less in the secrets than in the past itself: nostalgia plays a strong part in this novel, not least because the fast-dwindling Parsi community, thanks to intermarriage and small families, now numbers fewer than 100,000 people worldwide) There are assorted neighbors and bosses, many of them blessed with such colorful (but typically Parsi) names as Dolly Ichhaporia, and there is a man who, as a sideline, sits outside a bookshop and writes or reads letters for illiterate laborers who have come to Bombay from the countryside: as he shares with us stories of 16 year-old girls married off to 60 year-old widowers, or teenagers hanged for loving across caste lines, he offers Mistry a chance to suggest what he thinks the writer’s function is. For the most part, though, the pages are filled with the bawdy jokes and earnest homilies of groups of people sharing a very small space in a city where life tomorrow is no certainty.

Mistry never evinces any interest in playing up the exotic aspects of his India, or Parsi setting–rather, the opposite; and yet his evocation of the streets and sounds of overcrowded Bombay are almost painfully alive. We smell the spices burning in the kitchen, we hear the shouts of tradesmen from the street and we come upon an English that has almost never been caught, except by Salman Rushie (“They laughed again, and Roxana said that was enough gayla-gaanda for one morning”). Characters whistle the theme from the Laurel and Hardy movies, makes puns on Paganini, and pass stores where Santa’s reindeer are done up in cricketers’ whites. As much as India itself, Mistry works to bring affection and humor and philosophizing together:

“What a pleasure to meet Professor Vakeel’s youngest,” said Mr. Rangarajan, shaking hands with Roxana. “And are you following in your esteemed father’s footsteps, as educater and broadener of minds ?”

She shook her head. “I’m just a housewife.”

“Just ?” Mr Rangarajan was aghast. “What are you saying, dear lady ? Housewifery is a most important calling, requiring umpteen talents, Without housewife there is no home; without home, no family. And without family, nothing else matters, everything from top to bottom falls apart or descends into chaos. Which is basically the malady of the West. Would you not agree, Professor Vakeel ?”

“I don’t think they have a monopoly,” said Nariman. “We do quite well too when it comes to creating miserable families.”

Readers who recall Mistry’s first collection of stories, fifteen years ago, will note that his settings (Chowpatty Beach and Firozsha Barg), his props (dentures and bedpans), and even his settings–Parkinson’s disease and innocents being humiliated by hoodlums in the streets and by infirmities at home–have not changed at all. The first page of his first book introduces us to a man emerging from a W.C. and shouting at the long-suffering wife who was married off to him when she was 16 (Mistry has a keen sense of the lures and indiscretions of the body, and of all the ways it lets us down); in Family Matters the action is updated to 1996, when the city is still on edge after the Hindu-Moslem riots of three years before, and Shiv Sena nationalists threaten to beat up everyone who doesn’t change his store’s name from “Bombay” to “Mumbai.” Yet beyond the surface, nothing has changed. Mistry is one of those fortunate writers who found his setting in his earliest work, and has managed, in its small compass, to find a universe.

At the same time, he has mastered the art of weaving those early sketches into a full narrative that is compelling and well-constructed, and where his first book flickered with italicized words for all the particular rites and goods of the Parsi world, now he leaves the same words in roman type, as if to make clear that their strangeness to Western readers is not his point; always, in his fiction, he is trying to stress not how different these people are from their readers in the West, but how close. In some respects, indeed, he is among the most impressive of the Indian writers currently so visible partly because he does not try to make India his subject or his selling point.

His real territory is the divided heart. Like Graham Greene in a way, Mistry is a moral ironist–a humanist, that is, supple enough to see that happy endings are rarely possible when right is generally up against right (or up against wrong in a world in which wrong has all the power). People rue their acts of compassion in his books, and half-wish to be as wily as the crooked world around them. And though corruption in his books (as in Greene’s) is always located in some larger body–the government, the bureaucracy, or even just the circumstances of life –it is alarming precisely because it can so easily steal into the lives of the well-intentioned.

When Roxana agrees to take her ailing father into her overcrowded apartment, therefore, she strains her relations with her husband (himself a fond and generally good-natured sort), and strains, even more, the family’s already overstretched finances. (Housing prices are indeed a crippling concern in a Bombay where rents are often as high as those of Tokyo or New York, even as 5 million people live on the streets). In desperation, Roxana’s husband is driven to trying his hand at an illegal lottery, helped by a flirtatious woman next door, and sometimes to cursing the very wife he loves. And watching his parents squabble, their youngest son, Jehangir, decides he will do anything to try to assuage their problems, even if it means taking bribes in his capacity as a “Homework Monitor.” Roxana’s act of kindness, then, sets about the trail of circumstances that brings her soft-hearted 9 year-old son to the very corruption that is destroying the city around them.