“I opened my eyes, in no hurry to wake up. The memory that started off my Sunday was Dona Maura’s fingers on the table. I closed my eyes and tried to go back to sleep. It didn’t work. It was after eleven and I’d slept enough. The light that worked its way through the venetian blinds was weak, almost nonexistent, and was accompanied by the sound of rain, which I wasn’t sure if I really heard or just imagined…The vision that greeted me in the mirror was of a man whose hair and general demeanor recalled one of the Marx Brothers.”

You read this opening to a section of the Brazilian novel, The Silence of the Rain, by Luiz Alfredo Garcia-Roza, just translated into English, and you’re haunted by a strange sense of deja vu. Something is being conjured up out of the collective memory–the rain, the loneliness, the restless man alone–that feels as familiar (as the worldly-wise narrator would no doubt put it) as a hangover on a Sunday morning. Inspector Espinosa uses a Parker pen that “dated back to the war–the second, naturally,” and envies the “cops in American movies”; for breakfast he munches on leftover cheese and admits, “It wasn’t brunch at the Plaza, but it would do.” When the narrative switches to the third person, and we see the inspector from outside, wandering, as often as not, from a local McDonald’s to the Forensic Institute, it is to find that he “walked across the weight room like a priest walking through a nudist colony.”

That simile is the tip-off: here is none other than Philip Marlowe, the iconic gumshoe patented by Raymond Chandler, translated into modern-day Rio and outfitted with a few local mannerisms and a new name. It’s not entirely surprising to see Marlowe walking the sun-bleached, crime-riddled streets of Rio; of all the great figures of the American Century, he seems one of the most durable in part because he travels so widely and so well. Haruki Murakami, who has begun to revolutionize Japanese literature with his everyday mysteries of identity and disappearance (who am I, and what happened to that memory–that girl–who was here a moment ago?), began his career by translating Chandler, among others, into kanji and katakana script. Fay Weldon, in her recent autobiography, confesses to growing up at her Scottish-inflected school in New Zealand on Chandler. It’s commonplace to hear that Ross McDonald, Walter Mosely, Kem Nunn, even Bret Easton Ellis (with his coyotes howling in the distance) could never have written without Chandler’s shadow by their side; but his list of admirers extends to far more unexpected places–V.S. Pritchett, W.H. Auden, Elizabeth Strout. “I opened a beer and waited for the three beeps of the microwave,” says Espinosa, and we’re on familiar ground again. 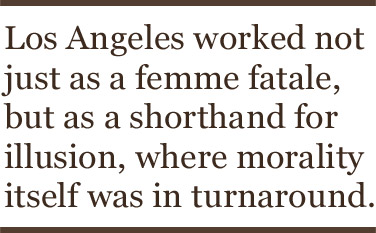 Influence is a curious thing, as the Everyman’s Library release of a complete collection of Chandler’s short stories (and its simultaneous release of two omnibus editions of his novels) underlines; there’s no anniversary to celebrate, and no ostensible reason why Chandler should be brought before the public eye again (none of his seven novels has ever been out of print). Yet he seems as much in fashion today as the Nobel Prize-winning poet who was born in the same year as he was, and likewise commuted between the English and the American ways of seeing things to suggest a modern fracture, T.S. Eliot. Dreiser, Lewis, Upton Sinclair are all more warmly received into the canon, and yet none of them gave us a voice, a presence–a moral stance, really–as easy to recognize and as hard to forget as Raymond Chandler did. And even fewer American writers of the century just past gave us a location (in Chandler’s case, Los Angeles) that worked not just as a femme fatale, but as a shorthand for illusion, which came to seem an almost allegorical zone in which nobody is what he seems to be (not even the straight-talking detective), and morality itself is in turnaround (while the self is in its ninth rewrite, being worked on by other hands). Even those who’ve never heard of Chandler or Marlowe seem to recognize, almost instinctively, their classic props: the dangerous blonde, the rain-washed streets (broken neon flickering above the empty hotel), and, above all, the loner hiding his soft heart behind quick quips and a hopeful bravado.

One way to explain Chandler’s hold on us still would be to point out that he was one of the first writers lucky enough to begin writing novels just as the movies were asserting their force as the mass-art form of the American moment; like Graham Greene in his way (and, more recently, Elmore Leonard), Chandler wrote with the movies and sometimes for them, even when he was only writing novels. Where the writers of a slightly earlier generation–Faulkner and Fitzgerald, famously–were novelists who lost their way in trying to become screenwriters, Chandler wrote for both media at once, it seemed, allowing the movie’s sense of story to affect his prose even as his feel for atmosphere affected the films around him. Six of his works were made into motion pictures, and twice he was nominated for an Academy Award (for the Double Indemnity he wrote with Billy Wilder, and the Blue Dahlia he adapted from someone else’s work-in-progress). At some level, Humphrey Bogart, and all that he represents for us even now, could not have existed if Chandler had not invented him.

To this day Chandler’s stamp is most evident in movies, from Chinatown to L.A. Confidential; when Christopher Nolan, the director of Memento, made his first movie, Following, on a tiny budget in contemporary London, he based his story (of, as it happens, a burglar’s ruthlessness) around a two-timing blonde who wore her hair like a ’40s heroine, and a lonely dupe in a small room with a typewriter and a picture of Marilyn Monroe on his wall. Yet James M. Cain, Jim Thompson, and especially Chandler’s immediate inspiration, Dashiell Hammett, all gave us the noir voice too; what is it about Chandler that moved Evelyn Waugh, of all people, to refer to him, in the late Forties, as “the greatest living American novelist ?”