The Promise Of America  >

For far too many people, the world changed irreparably five weeks ago; holes were left in hearts and lives–in whole cities–that can never be repaired. And for those on both sides of the fighting in Afghanistan, these days are like no others. When lives are suddenly overturned by a rising of the waters or a convulsion of the earth, we tell ourselves we’ve been thrown about by an “act of God”; the recent violence, though, has been man-made, and its tremors are felt in every corner of the globe.

Yet in a larger sense, the horrors of the past month have been more a shock than a surprise. For many of America’s enemies, the war began long before September 11, years ago, in Lebanon and Saudi Arabia and underground–even in the World Trade Towers in 1993; and for those on the other side, wishing the Taliban were not in power and hunting down Osama bin Laden are nothing new. Sadly, the residents of Afghanistan have been running from their war-blasted country for decades now. Some people may have believed that America was invulnerable, the global economy was doing what no economy in history had done before and peace was now a given; but most of us recalled that Benjamin Barber, for one, had defined the coming age six years ago as pitting Jihad vs. McWorld, while Salman Rushdie had described–and inadvertently lived through–the same conflict before the Cold War ended. 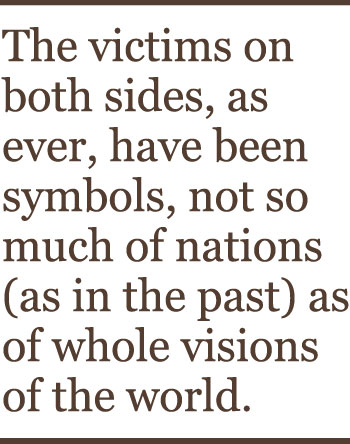 Much older than the current physical war, in fact, is the war of perceptions, fought with words and images on both sides, and often centering on the virtue of the image itself (the Islamic world, famously, refusing any human images at all, in its mosques and its holy books, even as modern America can seem a cathedral of the image, and icons of a more secular kind). The war sets the haves against the have nots, and the cultures of speed against the cultures of slowness, but most of all it puts those who believe in the future against those committed to the past. The debate in America may center around Islam, but the debate in many other places around the global campfire centers around America, the dominant force that shapes the consciousness and conditions of the global order and the symbolic power that stands for modernity, acceleration and the democratic blast of images. The victims on both sides, as ever, have been symbols, not so much of nations (as in the past) as of whole visions of the world.

One of the deepest ideas in classic Islamic thought centers around the inner jihad, the inward struggle (since jihad, of course, means “effort” or “struggle,” and has nothing to do with war) that takes place in every soul, regardless of its religious denomination. This is a daily struggle, as most of us know, and it is played out every time a stranger accosts us in the street, or another beckons us towards an open door: which of the voices inside us will we listen to, and how do we make sure the best in us is not hostage to the worst? More profoundly, how much do we blame others for the setbacks in our life, and how much do we blame ourselves? A doctor comes forward with a grave diagnosis, and something in us cries out against a world that makes no sense, while something else tries to find a hidden, higher sense.

For the vast majority of the world’s people, following recent events as in a kind of planetary town hall, transfixed by images, yet mostly powerless, the horror has been compounded by the sense of helplessness, as we watch moments whose consequences affect us all, but whose causes lie far beyond us. But in the war of perceptions, none of us is powerless. We can never control our circumstances, but we can always control to some extent how we respond to them, and in what light we choose to see them. We can choose at every moment whether to take our cues from CNN or from some holy book, and whether to see the fighting in terms of the two sides, or of what lies beyond them.

The air strikes will end at some point, and the enmity between incompatible visions of the world will certainly go on. For most of us, the important question is not what we think and feel now, but what we will think and feel when it’s all over. America’s challenge, in the war of perceptions, is to restore its image as a haven of peace and a stronghold of freedom and tolerance. The Islamic world’s task is to make sure that its true doctrine of forbearance and charity not be blotted by a few. But perhaps the greatest challenge is the one facing everyone, however far from the line of fire: how much do we allow ourselves to be ruled by the current conflict, and how much by whatever will outlast it? In the war of perceptions there’s no excuse for doing nothing.