If writing were a religion, V.S. Naipaul would be its most steadfast monk. Arriving in Oxford in 1950, as an 18 year-old scholarship boy from Trinidad, he already looked old beyond his years, haunted by an outsider’s uncertainties and yet determined to make his way in the world. After his father died three years later, the eldest son was obliged to help support his family back home,. but he stayed on in England and, as he always writes, pursued “no other profession” than writing. Living to this day almost alone in the countryside, and writing his way out of disorder with a ruthless chastity and horror of indulgence, Naipaul carries himself still like a literary sannyasin. 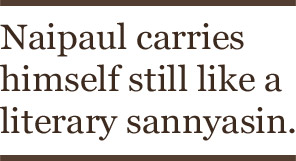 When Sir Vidiadhar Surajprasad Naipaul, as he is officially known, won the Nobel Prize for Literature last week, therefore, it seemed that the prize was being awarded to writing itself, as practiced, and sanctified, by a man who composes his judgments as if he’s never heard of the Internet or MTV, and holds onto “incorruptible” standards, in the Nobel citation’s apt words, while remaining “singularly unaffected by literary fashion and models.” Writing against the current of the times–even as he embodies them (an Indian born in Trinidad claiming the prize for Great Britain)–Naipaul has staked his whole career on the bet that you can best understand the modern world by stepping away from the hype and the swirl and roaming around it with a ferocious detachment. In the process he has fashioned the most transparent English sentences of our times.

It is typical of Naipaul–a reflection, perhaps, of how much he travels on the page as well as off, always urging himself on to new directions–that none of his great books reads alike; he’s reinvented his style with every major change in his thinking. A House for Mr. Biswas, the culmination of his early work, bubbles with the zest and color of the Port of Spain of his boyhood, telling the poignant story of a frustrated journalist (baed on his father) with a Dickensian confidence almost shocking in one not yet thirty. His patient studies of Islam outside the Arabic world, Among the Believers and Beyond Belief, read like oral histories of the modern faith, so scrupulously does the author absent himself, often, and get his subjects to speak as into a tape-recorder. And his immortal book, The Enigma of Arrival, describes the end of Empire, and the loneliness of a colonial exile simply by evoking, in clean, hypnotic sentences, the writer in his little Wiltshire cottage, at the edge of a once-great estate run by a dying eccentric.

The shadow side of Naipaul’s fearlessness is that he has done nothing to ingratiate himself to the world. His contemporary and fellow Nobel laureate, Derek Walcott, has written with sorrowful eloquence of Naipaul’s determination to put down Trinidad, and especially its African heritage, as if he were trying to push down the chaos and luxuriance of his boyhood. Those who share his Indian background have followed with fascinated alarm his vexed dialogue with the country of his ancestors over three books and 26 years (Naipaul being the rare writer who returns again and again to the places that get at him, as if to do them better). And hiding behind the disguise of a snuff-taking 18th century English country squire in tweeds, he has turned a pitiless eye on the failures of the developing world, in books with acid titles like The Mimic Men and The Overcrowded Barracoon. Tightly buttoned with semi-colons and taking pains to speak clearly and never to sing, his straight-backed prose reads as if it has never seen a tropical sunrise.

Yet what begins to redeem this unsparingness is the fact that Naipaul has turned the same honesty on himself. The Enigma of Arrival is an unusually moving allegory of immigration and reinvention partly because it bodies forth the newcomer’s anxieties so nakedly, as he watches the “idea of decay” being replaced by “the idea of flux.” In life, the writer has thought nothing of talking about his adventures with prostitutes as a young man, deriding even the fiction of his younger brother and marrying a divorced journalist 25 years his junior in the same year his devoted wife of 41 years passed away. He has sired no children and seems to allow himself few diversions. Even the knighthood in 1990 that might have seemed a culimination of all his efforts has not stopped Naipaul from writing as astringently, as restlessly, as ever.

The new Nobel laureate stands, in some ways, for a rigor and a discrimination that many find uncomfortable. Yet without embracing any of the half-measures of the age, he has quietly, almost unobtrusively, thrown light on the fury of faith in the Islamic world, the dissolution of East and West and the estrangement of those caught between worlds, simply by tracking his own anxieties. In Sir Vidia’s Shadow, the writer’s former friend and near-disciple Paul Theroux describes bitterly how even a longtime running-mate got sacrificed to Naipaul’s sense of his mission (sometimes he has seemed too busy–or fastidious–even for love). But the main thrust of the book’s early pages–a kind of post-colonial version of Boswell’s life of Johnson–is simply that Naipaul made the life of writing seem a plausible, even a noble occupation. Writing is how one finds order–a center–in a world ever more without a sense of orientation, he tells us; and everything must be sacrificed for clarity.