Several years ago, a book arrived on my doorstep, and it was like no other novel I could remember reading. Its characters were all spirits of a kind, rootless, and drifting far from home, and all of them had gathered, like partial ghosts, in a shelled nunnery at the end of World War II. At their center was a young woman from “Upper America,” as she called it, with a name that could have been Czech or Japanese or even—who knows?—Canadian. At her side was an Indian named for kippers who hungered for stories about Toronto, “as if it were a place of peculiar wonders.” Stealing in and out of their presence was a wanderer with the highly baroque Italian name of Caravaggio, though he, too, was a foreigner in the Italy where they found themselves, and came, as it happened, from Toronto. And lying in bandages in their midst was a “desert Englishman,” without a name and almost without a face, whose origins and identity were always mostly in shadow.

The book possessed me in ways both mysterious and easy to explain. Its scenes, precise, ornamental, full of exotic information, made me feel as if I were walking through a series of bejeweled chambers, sensual and deliberate and arched, a kind of literary Alhambra. The action was presided over by Renaissance murals and suffused with the spirits of Tacitus and Herodotus and Kipling, yet it felt as fresh as tomorrow, with the characters exchanging stories of desert winds and streets of parrots, golden temples and tropical spices. The love-scenes, charged with the lapis elegance of high Arabic poetry, threw open the windows of the stuffy house of English letters to let in a new, an intoxicating, light. Yet the truest attraction of the novel for me lay in something deeper: for even as it scrutinized the past and positioned its characters in scenes now fifty and sixty years behind us, it seemed to me not so much a historical novel rooted in what is now the last century as a revolutionary one, charting the outlines of a new world, in which strangers could interact and love and talk in a new kind of way, “unconscious of ancestry”. And if it didn’t read like the traditional English novels I’d grown up with at school, it also didn’t read like a typical novel from North Africa or Sri Lanka; it was something else, outside familiar categories. The Cold War had ended three years before the book came out, and geopoliticians were telling us that all the old divisions were now extinct; but in The English Patient this new world order was a fact of life, and any assumptions you might make about the nationalities of its characters—that the English patient was English, say, or that the one enlisted in the British Army was British—would be wrong. At the very moment when the world was being convulsed by nationalistic divisions, and people were being killed on the basis of the passports they carried, or their religions, these four semi-posthumous beings told us we could define ourselves in new ways and step into a different kind of community.

“We were German, English, Hungarian, African—all of us insignificant to them,” reminisced the title character as he thought back to a “desert society” before the war in which all kinds of people flowed together in a common cause, no borders or distinctions visible in the sand. “Gradually we became nationless. I came to hate nations.” His closest associate among the explorers had died, he recalled, because of nations; categories could quite literally be fatal. And as the four figures circled around one another in the candlelight, all “international bastards” in The English Patient’s pungent phrase, they moved, as the narrative kept putting it, like separate planets, “planetary strangers.” This vision of people turning like stars, independent universes almost, too large and mysterious to be pushed into the boxes of application forms, so excited me that I went back to Michael Ondaatje’s previous novel, In the Skin of a Lion, and found that it concerned the people, mostly immigrants, who helped build Toronto in the 19th century. They were not map-makers and explorers, in this case, but bridge -builders, though really it came to the same thing: their lives had been devoted to making a connection between two different worlds, old and new, or East and West. The English Patient was a sequel, I came to understand, which was describing the next stage in Toronto’s foundation, imagining a neutral zone in the middle of war—a space between, in some respects—in which strangers from different worlds could come and heal their wounds, in part by sharing stories, kisses, blood. I don’t know how much of this is what Michael Ondaatje consciously intended, but I do know that he could not help but be influenced by his own multicultured background, growing up in Sri Lanka, going to school in England and then coming to a Toronto where it might have seemed that many of his different homes from Asia, Europe and North America were coming together. The writer’s mixed-race siblings—or “mongrels,’ as he might provocatively have called them—lived, I learned, on four different continents even now.

And his quietly visionary book, making the Old World new by filling it with other worlds and pasts, spoke with particular beauty to a typically mongrel modern reader like myself who was born in England, into an Indian household, and was officially living in California (while spending most of my time in Japan).

The sudden appearance of the book on my doorstep had another, and a more practical aptness because, just three months before I entered its universe, I had taken my first trip to Toronto, the ideal waystation for a traveler from California who wanted to go to Cuba (and a reminder, too, that Canada was exempt from many of the enmities of its neighbor to the south, and still enjoyed cordial relations with places deemed un-American). As I walked around the city, stepping across centuries and continents each time I crossed a side-street, I found myself, as many people had told me I would, in the East Coast city of my dreams, the kind you see only in movies (in part, of course, because idealized visions of Boston or Washington or New York are generally set in Toronto, just as the San Francisco or Seattle of the world’s imagination is usually shot in Vancouver). I went to a ballgame at the SkyDome, I looked at “Indian-Pakistani-style Chinese” restaurants, I walked and walked among the shifting colors and sovereignties of Bloor Street, and everywhere I saw a confluence of tribes not so very different from what I would encounter in The English Patient. I even peered through the gates of the university where now we sit, and remembered how it had been the longed-for destination among those of us studying English Literature in England, in part because it was here that Northrop Frye had mapped out a whole design of the universal consciousness. In some ways, not so surprisingly, what I was seeing was a place with both the sense of history (and so the sense of irony) of the England where I’d grown up, and the sense of future (and so the sense of expansiveness) of the America where I’d come to make a new life. 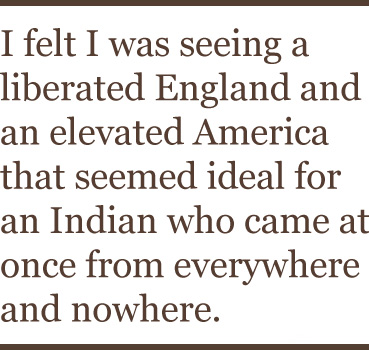 The first time I’d ever set foot in Canada, I suddenly remembered, was in 1967, when, as a child, I was brought by my parents to see the World Expo in Montreal and, mini-passport in hand, learned to become a citizen of the new world order by stepping from national pavilion to national pavilion in a compressed distillation of the globe. Not long before, like many of our background, my parents and I had sat in Oxford and wondered whether to emigrate to Canada or California (we ultimately decided on the place that presented itself to us as “the Athens of the West,” and later came to wonder whether we might not have been better off in Sparta).

Now, as I walked around what seemed to be a concrete, physical version of what Wired magazine, in honour of Marshall McLuhan had called “mosaic thinking,” I felt I was seeing, in some respects, a liberated England and an elevated America that seemed ideal for an Indian who came at once from everywhere and nowhere. I recognized the skepticism I heard in many voices, but it seemed free of the bitterness it might have carried in England. I responded to the earnest optimism and hopefulness of the place, but it didn’t feel as heedless of the past, and of grounding realities, as California often did. History was a given here, I suspected, as it was in The English Patient, but it didn’t have to be a confinement. I found myself exhilarated, too, by the quick-wittedness and intelligence of a culture that seemed free of the competitive bustle and noise I might expect to find in New York. Here, I thought, was all Manhattan’s software without, so to speak, its hard drive.

This was a lot, perhaps, to see in just two days, en route to the vibrant mayhem of Havana. And the Torontonians I met expressed surprise

and even alarm at my enthusiasm, inured as they doubtless are to the ravings of short-time visitors. As anywhere, they told me, the city

was governed by a hierarchy that the innocent newcomer couldn’t see, and that was no more eager to surrender power than any other status quo, as locked inside old resentments as anything in Britain or South Africa. The newspapers, besides, were full of the latest secessionist talk from Quebec; and the recent outburst of even small disturbances in the wake of the Rodney King verdict had everyone debating once again the virtues of multiculturalism.