The Perils Of Faith  >

Stay too far away from a spiritual teacher, the Tibetans famously warn us, and you cannot feel the heat; draw too close, and you get burned. The fire warnings grow especially urgent when that teacher attracts students through her warmth, and all the more so when the students, in turn, try to put words to the burning they feel around them. That is one reason why lucid and balanced accounts of spiritual communities are so hard to come by: the fires of emotional surrender tend to be so intense on every side-among those who have staked their lives on a community, and on making it work, and among those who’ve turned their backs on it, and defined themselves by that rejection-that the ensuing stories have the unsettling fervor of depositions in a divorce court. “I’ll love him forever.” “He ruined my life.”

Recently, I had reason to think about this again when I came upon the new book by Martha Sherrill, The Buddha from Brooklyn (Random House; 304 pages; $25), one of the most measured and disciplined accountings of a circle of idealists I can remember reading. Sherrill first came to Catherine Burroughs and the Tibetan Buddhist center she founded in Poolesville, Maryland as a reporter for the Washington Post Style section, intrigued by the sound of a big-haired, Simpsons-watching former psychic from Brooklyn who had suddenly been recognized as the incarnation of a seventeenth-century Tibetan saint. She warmed instantly to Jetsunma Akhon Norbu Lhamo-as Burroughs was now known-grew close to many of the one hundred or so students who had gathered around her, and even began to dream of her vivid and consuming presence, and to consider buying property near Kunzang Palyul Choling (or “KPC,” as the students call it); yet even as she was clearly rooting for the center to succeed, her journalist’s instincts prompted her to watch, and to record in minute detail, all the scandals (of money and sex, of course) that threatened to undo the community, as they have done so many others, and to devote much of her narrative to following a young nun who ended up fleeing the place and having Jetsunma arrested for battery. 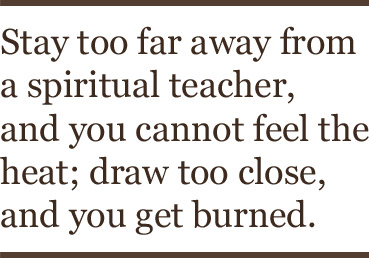 The Buddha from Brooklyn struck me as an unusually clear and close look at all the hazards-and potential-of trying to set up a spiritual community in America, as seen by an outsider pledged to objectivity and eager to learn; but more than that, and more valuably, it charts a heartrending and all but universal story about the costs of idealism and the mixed blessings of devotion, and about what happens when our sweetest ideals get entangled in reality and Realpolitik and the very complications we had hoped to leave behind. Much more than Jetsunma, it tells us about the price of faith.

Every teacher of spiritual values is a koan of sorts, part mirror, part Ozymandian riddle, but in this case the koan came with all the oversized intensity of a Technicolor marquee in Las Vegas. Jetsunma, a Dutch-Italian-Jewish daughter of a sometime grocery-store clerk and a convicted thief, made a practice-perhaps a point-of not conforming to anyone’s ideas of enlightenment (and does so to this day with her followers in Sedona, Arizona). Quoting unabashedly from Comedy Central, going to the manicurist once a week, and sporting a vanity plate that said, “OM AH HUM,” she especially unsettled her students’ easy assumptions (and ours) by parading a new young lover, of either sex, with every passing season. Most of what made and makes her sympathetic, in fact, is that she comes across as such a typically confused woman of her generation-worrying about her weight, eager to reverse a losing streak of four lost husbands, and more than ready to talk about her makeup, her problems with men, and her “abusive childhood.” What Sherrill sees in her, among other things, is vulnerability. And when she listens to her speak, dispensing sensible, practical tips about compassion, seasoned with talk of “the first big aha” and “Hell-ooo,” the visitor can’t help but be impressed by her emphasis on social action and the heart. On the big screen she would be played by Bette Midler.

Yet this full-throated and seemingly down-to-earth, even ambitious woman-dreaming of making her fortune through hair-care devices with “built-in gel paks that could be heated in a microwave” and once the subject of psychiatric study-was seen by Penor Rinpoche, head of the Nyingma lineage (the oldest school in Tibetan Buddhism), questioned for a while, and then pronounced to be the reincarnation of a Tibetan saint. The rinpoche (so revered in India, Sherrill tells us, that followers collect the pieces of soil he’s walked on) was clearly impressed by her ability to attract students, and apparently undeterred by the fact that his new acolyte, until recently, had been a channeler of the prophet Jeremiah and of “Andor, who claimed to be the head of the Intergalactic Council.”

Stranger things have happened, of course, and the incarnation system is all about finding a divine light in unexpected, undiscovered places. Yet this constantly unexpected saga challenges our assumptions in all kinds of fresh and unusual ways. We’re used, after all, to taking wisdom from eccentric Zen masters and from charismatic Tibetans who breach every conventional notion of propriety and sobriety, telling us that everything they do-eating pizza, watching TV, having sex-is, if seen in the right light, a form of service and instruction. Why should we not extend the same trust to an American woman who’s been recognized by one of them? Why are we more comfortable with a teacher who looks exotic or otherworldly than with someone who looks, in Sherrill’s words, like a “Beverly Hills real estate agent” and doesn’t hide her failings? Isn’t the very definition of American opportunity that, to amend the old adage, every girl can grow up to be a Buddha?

Jetsunma’s story, to me, dramatized many of the questions that shadow every spiritual center, precisely because it played itself out in such extravagant and colorful terms; and the stakes involved intensified because the “Fully Awakened Dharma Continent of Absolute Clear Light” (as Sherrill translates KPC’s official title) quickly-very quickly-became the largest collection of Tibetan monks and (mostly) nuns in America. Jetsunma’s students, in short, were not just practicing meditation, or listening to Tibetan teachers; they were actually donning robes, adopting new names, and reciting vows in a language they couldn’t understand. Yet these solemn oaths-that, for example, they were not hermaphrodites, and were not animals or spirits, and that they would not drink, have sex, or dance for pleasure-were all being taken by a group of typical Americans: Redskin fans, former Jesuits, a six-foot female personal trainer from Bally, and a man who had sold weapons parts to Third World countries. Their story is essentially the classic (and unanswerable) one of what happens when good and imperfect souls aspire to perfection.

None of this is particular to Buddhism, of course-Christian groups are often much the same. But the difficulties of pursuing their ideal were surely compounded by the fact that these students were committing themselves to a discipline so far, in time and space, from everything they knew. Every single aspect of Tibetan Buddhism-the relation between the sexes, the nature of hierarchy, the very meaning of obedience-had little relation to what they had grown up with and nothing to do with the notions of punishment and sacrifice that they imported from their all-American homes. Even the self they were so eagerly trying to dissolve might be said to have a different quality, a different meaning, in many parts of Asia where people tend to define themselves in terms of a family, a company, or even a country. To take another example, the essence of Zen, as I understand it, is “nothing special”; yet how can it possibly be nothing special to someone who has leaped across a great cultural divide, taken on a whole universe of alien customs and words, and abandoned everything he knows to embrace it?