When you step into a classic ryokan, or traditional Japanese inn, you step into decades, perhaps centuries, of silence. I was reminded of this as soon as I returned, not long ago, to Tawaraya, a nineteen-room inn that sits on a tiny lane of lanterns near the heart of old Kyoto. Though the place is often referred to as “the world’s best hotel,” there was nothing to denote its presence save a tiny sign hanging above an entranceway that has been welcoming guests for nearly three hundred years. I stepped through the doorway, barely large enough for one person, and found myself in a polished-stone genkan, or reception area, roughly the size of a small kitchen (the term different world). There was no lobby to be seen, no front desk or elevator: just a man in a Japanese silk jacket taking away my shoes (to polish them), a kimonoed woman laying slippers before me, and another man, in shirt and tie, whisking away my bags.

I stepped up onto the tatami mat and entered a world of shadows and screens. A single candle reflected off the polished wood of a narrow, narrow corridor. A wooden ladle sat in front of a pebbled indoor garden. A maid in kimono, shuffling along the corridor in white socks, her very movement a whisper, led me around a corner and down a passageway to my room, named after an ancient word for “green”, midori. She opened a door and slid back a panel, and there were two bare rooms, filled with emptiness and silence.

Though I had been in the inn for scarcely thirty seconds, my bags already sat neatly in one corner, as if I had been there forever, the maid ushered me to a cushion overlooking a private garden— moss and a stone lantern—and then, on her knees, bowed to the floor and placed herself at my service; another maid, who would also be waiting on me full-time, asked what I would like for breakfast the next morning, and when I opened the “Guide to Services” booklet before me and found a hand-drawn map of a “Path to the Serene World.” The maids came in again with a mug of green tea, some traditional sweets, and a hot towel, scented with incense for me to refresh myself with. 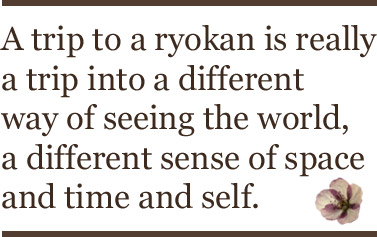 A trip to a ryokan is really a trip into a different way of seeing the world, a different sense of space and time and self. Not just because you wash (as everywhere in Japan) before you get into the tub (seated on a wooden stool, and slopping water over different parts of your body from a pail); not only because you’re eating with chopsticks and sleeping on the floor on a rice-husk pillow. But mostly because a ryokan is an initiation into the classic principles of Japanese design, which tell us that a suggestion is always more persuasive than a statement, and opulence consists mostly of finding out how much you can do without. In the most elegant ryokan, like Tawaraya, there are no dining rooms, or parking lots, or public areas; the emphasis is on privacy. The view from your room is not grand and expansive; it is deliberately particular and small, a study in miniatures. And the kind of recreation a ryokan offers has little to do with swimming pools, or health clubs, or discos, and everything to do with a sense of simplicity and silence so luxurious that all you want to do is sit and sit for hours in your room, watching the light reflect off paper screens and listening to the rain beating on the roof. You become a part of the scene; the scene becomes a part of you.

Even the most everyday aspects of your routine become transfigured, somehow, in the ryokan’s pearly light. You sit, typically, on the floor, at a low table, and the same room becomes dining room (as the maids serve your meals in your chamber) and bedroom (as they lay out your futon after you have finished eating). You slide across the tatami mat on socks and step around the spare, green garden in geta, or wooden clogs. Most guests, on entering a ryokan, will don a yukata, or light cotton kimono—a way of signifying that they have left their daily selves behind—and glide around the inn, and even the nearby streets, in the loose, relaxed gown. In a place like Tawaraya, everything is made of natural materials—reed and bamboo and paper and thatch. There are no locks or curtains, and the doors are so low that even the diminutive maids have to bow every time they come in or out.

The other feature of a ryokan, which I have never experienced in a lifetime of staying in hotels, is that, like the most alluring kind of partner, it reveals its secrets only gradually, one at a time; the longer you look, the more you are beguiled. When I first arrived in my room, I could hardly believe that I was paying hundreds of dollars a night for two largely empty tatami spaces; soon, I was thinking that I’d found a bargain as I settled into what felt like an ancient box full of hidden compartments. I opened the black cabinet in my greeting area—a small spray of flowers in a slim vase on top of it—and found a minibar inside; I opened a cupboard to hang up my clothes and saw that the wallpaper was made of sheets of traditional songs a geisha might sing. On one shelf was a lacquered box, inlaid with mother-of-pearl, which turned out to contain antique writing instruments; nearby, in the tokonoma—the traditional alcove that is virtually a shrine to the religion of the seasons—there was just one scroll, so delicately traced that I could hardly read it, and a small ikebana flower arrangement. In a room of rigid straight lines, the single curved flower sang.

Before long, in fact, I had discovered that my simple space actually contained seven separate chambers, and the paper screens and sliding doors which made up its divisions allowed me to create a seemingly infinite number of combinations—framed angles of the garden, rectangles of air, silhouettes of twigs on almost transparent screens. I felt as if I were afloat in a room that trembled like a mirage—now large, now small; now shadowed, now bright. A ryokan is in many ways a study in rectangles, and its air of geometric clarity is enforced by the black edges of the tatami mats, the darkened bamboo screens hanging from the roof (to filter sunlight). Not for the first time, I decided that I would forswear wandering out into the romantic city of two thousand temples, and simply spend the day exploring the many facets of my room, learning to read it (as one might, again, a partner) by a hundred different lights.

The Japanese excel, in many respects, at drawing lines and marking off firm boundaries (between work and play, or the private self and public self; between me and you); everything, from their lunches to their feelings, seems to come in boxes. But in the ryokan I could better appreciate how that sense of segmentation actually makes for a kind of flexibility—“infinite riches in a little room,” as Marlowe put it. My space changed shape and size and color as futons were put down or put away, screens were pulled up or back; and I, likewise, found myself slipping from socks to wooden clogs, to straw sandals (in the stone-paved area beside the garden), to slippers again. Identity, in Japan, is more porous and adaptable than it is in the West.

The result of all this is that the ryokan changes you as you begin to adjust to its nuances. In most hotel rooms I enter around the world, I rearrange the furniture to make myself at home; in Tawaraya, it seemed as if the room were rearranging me. I began to speak more softly and to move deliberately; I start to notice the tiny white plates and the miniature white flask of sake put out in my garden for the gods, the sewing kit, in its own box, inside a silk pouch. Before long, I found that I was almost instinctively straightening my sandals every time I took them off.