In Shanghai, just behind the area where elderly couples gather each day at dawn to go through the ghostly motions of Tai Chi, cranes are busy erecting the world’s tallest building, to go with the tallest tower in Asia and the largest department store on the continent. In downtown Toronto, on a jam-packed sidewalk, a blue-robed Chinese monk is knocking clappers ceremoniously together. Amid all the promiscuous minglings of our mishmashed global order, the most confusing ones often arise not when cultures clash but when centuries do, with their different senses of time. The modern Everyplace is the wall of a luxury hotel, where clocks show seven different times at once. 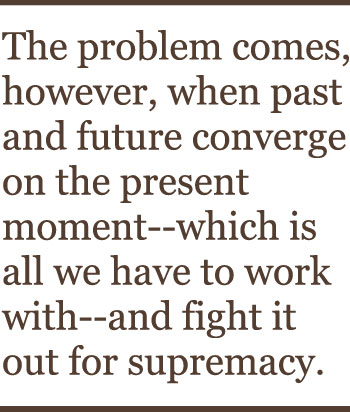 Throughout the century now ending, the trade balance of tenses has been a simple one: America has exported tomorrow around the world–not just in the form of the latest machines, youthful trends and state-of-the-art Star Wars visions, but also in the sense of the born-again optimism native to a young Republic of Hope. The more traditional cultures of the world, in turn, have brought into America pieces of the past–Ayurvedic medicine, say, or Tai Chi, and, more deeply, a sense of community and continuity that has breathed new life into the “old-fashioned” American values of family loyalty and hard work. In cultures as in households, the old pass on their wisdom, and the young bring their reviving innocence.

The problem comes, however, when past and future converge on the present moment–which is all we have to work with–and fight it out for supremacy. The old habitually say that everything was better when they were young–let’s go back. The young are by nature sure that everything will be better when they come of age–let’s go forward. In the former Yugoslavia, in Somalia and the Middle East, America has come in saying, “Make a fresh start!” And those caught in their ancestral rivalries reply, “How can we make a pact with the future until we have made a peace with the past?” During the war in Vietnam, an American culture of the individual, which thinks in terms of years, came up against an older Asian culture that sees identity in terms of a collective and thinks in terms of centuries. The result was as bewildering as when you ask a question in French and get an answer in Cantonese.

The pundits tell us that the central division in our transnational world is between the “slow” cultures of the plow and the “fast” ones of the microchip, the gap between them accelerating at an unprecedented rate. But what is more of a vexation in our modern times–a temporal Tower of Babel, as you could call it–is that everything’s mixed up: fast and slow are present in every country, often, and in every household. Ancient cultures, as in India and China, are eager to invite the future to come to stay, so long as it doesn’t interfere with the way things have always been; software technicians in the Silicon Valley–many of Indian or Chinese descent–try to bring neighborhood to a virtual borderless world (even as their parents are cursing Sikhs, or debating about Mao Zedong). As James Gleick describes in his sobering new book Faster, a man with a watch knows what time it is, but a man with two watches is never sure.

The single biggest strangeness of the American Century we’re leaving is that it has been shaped, to a startling extent, by a technology that encourages us to believe that progress is a good in itself, and by a global power, the world’s youngest, that is more interested in where it’s going than in where it’s been. His Alliance for Progress, Bill Clinton wrote recently in an editorial for the New York Times, is pledged to “elevate hope over fear and tomorrow over yesterday.” Rousing words, but who’s to say that tomorrow is better than yesterday, those in Sri Lanka or Peru might retort, and why should we put hope (based on what might happen) over fear (based on what has palpably happened)? It isn’t self-evident that mankind is really progressing, at a level deeper than machines, any more than it is that any of us is wiser than our parents.

As the clock ticks down toward the millennium, which has the air of being the largest future in some time (and as, paradoxically, that clock moves more and more of us to dwell on the past, our anchor), we find ourselves, more than ever, doing the splits, with one foot racing toward the future and the other firmly rooted in the past. “Fast” cultures fret over Y2K, and slower ones, some even with their own calendar (in Nepal or Ethiopia, say) hardly acknowledge that a new millennium is coming at all. The jangledness of inhabiting several time frames at once is the hallmark of our jet-lagged age. The clappers bang together on the sidewalk in Toronto, but they mark a clock without a face.