Growing up within the tightly guarded confines of a fifteenth-century English boarding school, my friends and I took as our tokens of accomplishment the somewhat recherche gray volumes known as Penguin Modern Classics. When I was in college, in the midseventies, Picador books would become the rage (Hunter Thompson, Tom Wolfe, Richard Brautigan–outlaw American energy packaged as real literature!); and, a decade later, in the sleek Manhattan of the eighties, the Vintage Contemporaries series (born, it seemed, out of Bright Lights, Big City) would have a special cachet as some of us hobbled off to Area at 3:00 A.M. But in 1972, in rural, changeless England, where our allowances were scarcely large enough to stretch to three packages of McVitie’s digestives every six months, and where we had to attend chapel twice a day, Latin hymns on Sunday nights, and class at 7:30 A.M.–all in white tie and tails–we could think of no better way to distinguish ourselves than through amassing these formidable gray paperbacks on our shelves. Canetti, Capek, Svevo, Vian: even now the names, nearly all foreign and unpronounceable, reek of forbidden cigarettes and the cafes we weren’t allowed to visit. To this day I remember next to nothing of any of these books, and even the authors’ names are increasingly strange to me. But in anxious adolescence, they were the last word, so it seemed, in worldliness and sophistication, to be displayed beside our beds like the conquests (in this all-male internment camp) we hadn’t made. The funeral-black Penguin Classics–Xenophon and Sir Thomas More and Plutarch–were too much like everything we were trying to escape; the jaunty contemporary orange Penguins–Laurie Lee and Keith Waterhouse and Kingsley Amis–seemed too much a part of the dreary English landscape all around; but the Penguin Modern Classics-The Magic Mountain, The Counterfeiters, Nausea–were everything we sought (and found most efficiently, as it happened, in the cinema, among Pasolini renditions of Boccaccio and Chaucer)–namely, grown-up European works of high culture that packed the punch of illicit magazines. 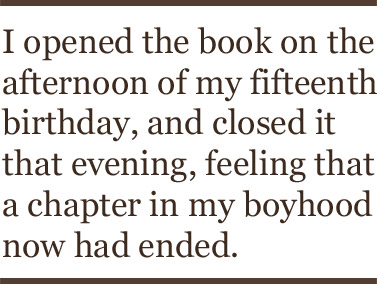 Occasionally, almost flukily, a volume would surface that had so much to do with adolescent boys escaping from their military surroundings (and brandishing, as status symbols, philosophical tomes) that we would actually read it in its entirety and with a palpitating, almost awestruck sense of recognition. Alain-Fournier’s Le Grand Meaulnes was one such work, inevitably, with its haunting evocation of a paradise glimpsed in boyhood and never found again; Raymond Radiguet’s Le Diable au Corps (or The Devil in the Flesh, as it was translated for us) was another, a highly French tale of an eighteen-year-old boy taking on an older mistress, which convinced us all we were actually Frenchmen under the skin. A fifteen-year-old housemate (now, of course, one of England’s most distinguished moral voices) once slipped me a copy of Hesse’s Narziss and Goldmund with the blunt Anglo-Saxon commendation, “It’s got a hundred screws.” I read it immediately, and almost instantly felt at home in it: not only because of its austere gray cover, depicting a chestnut tree outside a wintry monastery that looked uncannily similar to the monastery-in-mufti where we were working on our chastity, poverty, and obedience; and not only because of its earnest, almost sacramental hallowing of a friendship between two young men, one immersed in the world of books, the other committed to finding the meaning of life through a series of adventures (in short, as my friend had promised, an archetypal Hellenic quest with R-rated props); but also, I suppose, because–like all our favorite books–it was about a seeker pledged to the holiness of the heart’s affections and committed to individuality at any cost. (Much later, I would see that part of its appeal might even have had to do with the fact that it was the only common link between my surplice-choired medieval school and the vagrant hippie California of my parents’ home, to which I returned on holidays–and, of course, it took that very commute, the dialogue between Apollo and Dionysus, as its theme).

But before I could fall completely under Hesse’s spell, another book came along that touched a sudden flame in me in some more mysterious way. D. H. Lawrence’s novella The Virgin and the Gypsy (written not long before his death, in France, in 1930, and found only after it) was an orange Penguin of the kind we affected to despise, and came from someone as much of the countryside around us as the Huxleys and Orwells we were force-fed in class (and the poems that rhymed with the memorial plaques that surrounded us–“Dulce et decorum est pro patria mori”). Yet it had to it something foreign and subversive that seemed to place it among the gray books we regarded as canonical. Part of its attraction came no doubt from the photograph it bore on its cover–of the Canadian actress Joanna Shimkus, as ethereal and undefiled as a Botticelli angel, looking into the distance as she is approached by a movie Minotaur (Franco Nero, then at the height of his fame). Part of it no doubt came from its bringing together of young English girl and alien wanderer–as if Narziss and Goldmund were of different sexes, and could interact in newly electric ways! But whatever the source of its magic, as familiar and unfathomed as a loved one, I opened the book on the afternoon of my fifteenth birthday, and closed it that evening, feeling that a chapter in my boyhood now had ended.

Later, of course, I would find any number of clearer reasons for the way in which it possessed me. Virgins and gypsies were the two kinds of beings most outside our orbit then, and most subject to our fascination; and Lawrence’s heroic energy, his unvarnished romanticism, his relentless, burning determination to tell a story about a young and inexperienced soul awakening to its destiny (its passion) were guaranteed to appeal to overeducated inmates like ourselves. The book was everything that was denied us (girls and movement and rebellion). It was escape–from the dark and draughty classrooms on whose desks 530 years of predecessors had scribbled their names; from the unreal rites of reciting the principal parts of the Greek verb (“baino”) (“I walk”) in our pajamas and then donning black robes to go to class at dawn; from, in fact, all the cultural weight and sense of expectation embodied by those Penguin Modern Classics.

But it was something more than that, too. At college a few years later (where beginning students of literature were allowed to read “modern” authors for their first year only-“modern” meaning later than 1832, though earlier than 1945), Lawrence was far and away the most explosive novelist on offer–and, we soon found, the only male novelist, other than Henry James, that girls seemed to like too. And there was something about his raw, passionate intensity, scrupulously unrevised and incorrigibly restless, that felt (as Emily Bronte did) like the way we might write in our diaries, if we admitted to them. Not forbidding like Joyce, not rich with metropolitan polish like Woolf, Lawrence came across as less a text than a man, shouting in our ears.